Po Bidau Gustang (포 비더 구스트앙, Po Bidder Gustang) is the head of the Po Bidau Family, one of the Great Warriors and the first living being to systematically record Shinsoo. Po Bidau Gustang is the Tower’s most famous Wave Controller and writer. Excluding the eccentrics within The Workshop, he probably knows the most about The Tower.[1]

Eurasia Blossom and Gustang were lovers for a period, yet both splits after the infamous Eurasia Enne Zahard incident (Enne Zahard was the daughter of Blossom and Gustang. Blossom was very opposed to her becoming a Zahard Princess).[5] After splitting with Blossom, acting contrary to his reputation, he started to go out with different women. However, his greatest followers took his side and stated that he was acting up because the empty spot where Blossom once occupied was too big. Of course, when he went from a "nice guy" to a "bad guy", his popularity increased even more.[1]

At some point, Gustang proposed to Zahard to choose exceptional female children who will be gradually injected with Zahard’s blood and let them compete with each other as they climb the Tower. Of all these women, the most talented of the surviving princesses would become Zahard’s wife. And thus the system of the Zahard Princesses came to be. However, as the competition intensified, the relationship between the 10 Family Heads also started to turn sour leading to discord between the Families. [6]

Along with the glasses he wears to better see the flow of Shinsoo and elegant brunette hair, he’s actually quite a handsome guy. Eurasia Blossom once commented on Gustang’s good looks: “Yeah, he’s like an elegant, ancient book... the same kind that makes you yawn after reading”.[1] In his most recent appearance, he wore a smart white tuxedo with black lapels, a dark grey shirt underneath and a black tie.

However, because of his quiet, reserved expression, most find it hard to approach him, so he’s often the "target of affections".[1]

Gustang is shown to be an arrogant individual thinks anyone who isn't Zahard, Urek Mazino, Baam or any other Great Warriors are bugs. Gustang has a great reputation and influence in his family, even his family members think he has omniscient intellect. He even directly challenged Zahard by stealing an important item from him despite knowing fully well that Zahard would notice and brand him as a traitor and most likely, as it turned out to be, order the complete destruction of his family, and even after this, told Zahard's Army that "A Rift has begun to form" as if to declare war on Zahard. At the same time, he is not above taking things personally even towards the Great Warriors: Although he appears to harbor no ill will towards Arlen despite having been forced to engage her during her war with Zahard, openly holding her in a high regard for getting along with everyone so easily, he shows nothing but utter disgust towards V, saying he was the worst person he ever met. 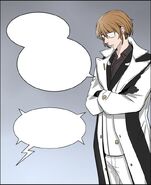 Data Gustang
Add a photo to this gallery

Gustang and Gong Bang have a pretty close relationship. So much so that Macseth (The Great Father of Gong Bang) and Gustang often get together to exchange stories.[1] Because of this close relationship, there exists a rumour that says "Gustang knows the way out of the Tower".[1] Hearing this rumour, Urek Mazino once visited Gustang to learn the way to leave the Tower. However, he left after a while with a headache and complained to Baek Ryun, “It'll be easier for me to dig my way out of the Tower with a spoon than to learn anything from that guy”.[1]

Po Bidau Gustang is the one who pioneered the research of Shinsoo[5] but, other than Shinsoo and the Tower, Gustang was highly interested in researching the "Guide" Position.[1] However, the topic of the "Guide" is a highly taboo topic within the Research Association.[1] Some believe it's because of his pride as a researcher that he doesn't want anyone else to take his research targets.

Before the Workshop battle began he was "coincidentally" assigned as the head of the E-rank Workshop Battle instead of a Great Teacher, overseeing everything onboard the Archimedes. He made a brief but unofficial appearance at the beginning of this arc where he could be seen smoking and sitting next to a CD player. A voice emitted from the player and asked if the man had an answer to his question. Gustang didn't answer directly, instead saying that there was still lots of time, as the game had just started.

Gustang made another appearance, talking again with the person from the CD player. The man from the machine stated that he allowed Gustang to control the Workshop Battle however he wanted and asked him about his plan. Gustang replied that he will watch how the boy dealt with the hardships as long as the competitors didn't cross the line while seeing how strong the "real Thorn" got when it was in the hands of an Irregular.

As Androssi rescued Baam, Khun, and Rak from the dissolving solution with Bon Bon, Gustang approached Madoraco. When the latter noticed the former's presence he ordered his Rankers to withdraw and abandon the Thorn, otherwise, Gustang would destroy their trade business.

Madoraco asked when he began to play on the palm of his hand while also guessing that he was the one who gave FUG Enryu's Thorn, to which Gustang replied that he was only at Archimedes "coincidentally" as the head of the Workshop Battle in place of the Great Teacher, only restraining Madoraco for a fair game.

Later on, Gustang was discussing with his unknown associate, who then asked the Family Head "who was the 'real' Zahard's Prince that will take the Tower's last test?". Gustang replied that the person was impatient and that 'their' adventure had just begun.

Gustang is revealed to be the person that helped Garam Zahard escape from the Zahard Empire by setting up the Floor of Death and keeping information away from Zahard.

Gustang appears in front of White and Karaka while they try to leave the Floor of Death with all the souls from the Spirit Room. He muses on how the Arie Family was never known to teach how to be a thief but decides to let White try to escape, which is impossible since he has bound himself to the Floor by consuming souls that were cursed, and proceeds to remove the stolen souls from White but spares his life.

After having a talk with Urek about returning the souls to the Spirit Room, Gustang notices Baam and calls him Son of Arlen, claiming that he was waiting for him. With the souls safely returned, Gustang and Baam have a talk. The Family Head expresses shock that Baam isn't aware that he definitely knows Arlen as he is one of the Great Warriors and notes that he was on good terms with Arlen as her easy-to-get-along nature made it easy for him but he shows nothing but disgust and anger towards V, saying that all he has to say about him is just that he's the worst person he ever met. Gustang offers Baam a favor with his expertise in science and medicines and at Baam's request, he cures Rachel of a deadly poison with just a gaze.

Gustang informs Baam that he has a test for him and in exchange, he will give him the second Thorn fragment. This test is to recover an Item from a place called the Hidden Floor. Gustang explains how the Hidden Floor works and that the Data of a Younger Zahard is protecting it. As Baam accepts the offer, he asks Gustang to lift the spell on the Floor of Death but Gustang reveals it is difficult for even him to remove the completed spell and even if he could, he won't since it would put Garam in danger and puts Baam in his place by reminding him how the inhabitants actually want to stay there to not die. Gustang then confronts Urek and lectures on how far beneath Joe is compared to him, much to Urek's distaste, and reminds Urek that what Garam wants from him is the death of Zahard so he shouldn't do it and offers to spare Joe from having his memories erased but Urek tells him to erase Joe's as well, mocking Gustang's earlier words.

At the end of the arc, Gustang has a conversation with a mysterious person about the events that just unfolded, saying that Urek Mazino wasn't going to be a problem. He further informs this person that he gave the second Thorn to Baam and a gift to Rachel, to whom he calls his "pawn".

After the battle at the last station came to an end, Gustang shows up in his floating castle with a group of people by his side. After a messanger from the Po Bidau Family explains Ha Cheonhee what was happening, Po Bidau Gustang takes Rachel and Yura Ha from Ha Cheonhee's warship.

Gustang sees the items stored in the Staingray and proceeds to offer Rachel three gifts, in exchange for the three gifts she collected for him.

Although his ranking is rather low among the Great Warriors, as the 14th top Ranker in the Tower, Gustang is still an exceptionally powerful High Ranker. Gustang's tremendous power was sufficiently great that when he arrived at the Floor of Death, he was able to paralyze Hoaqin when he had the power of all the souls of the Floor, with White noting his power felt similar to that of Arie Hon's own and also cause great shaking, even alerting Urek Mazino.

He referred to himself as an "expert of science and medicine" of the Tower. He was capable of curing Rachel of a deadly poison just by looking at her.[7]

Memory Manipulation: Po Bidau Gustang was shown to be able to erase the memories of every inhabitant on the Floor of Death.[8]

Soul Extraction: With just a gesture of his hand, he was able to extract the souls of the Floor of Death that Hoaqin stole.

Immense Shinsoo Resistance: He was able to be completely unaffected by the powerful Shinsoo pressure of the Spirit Room.

Immense Shinsoo Mastery: It is known that he was highly skilled in using Shinsoo to assist as a "Support" Wave Controller, in contrast to Blossom's offensive skills with Shinsoo as an "Offensive" Wave Controller.[5] Gustang's mastery of Shinsoo allowed him to be the first one to systematically analyze and classify Shinsoo, starting the Research Association.

Retrieved from "https://towerofgod.fandom.com/wiki/Po_Bidau_Gustang?oldid=130534"
Community content is available under CC-BY-SA unless otherwise noted.