Pierre (피에르) was a member of Team Yura during the Train City Tournament before Ha Yura's betrayal.

He was very confident in his teammate, Ha Yura's abilities, and even boasted greatly about them which would prove to be his downfall.[1] 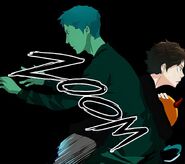 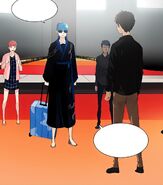 After being picked by Ha Yura as one of her teammates, he was elected as one of the initial participants, as a Defender, in the game of "Crazy Yellow Ball". In the first round, Baam was able to pass him after freezing him, which took him by surprise. In the next round, he watched as Yura overcame Baam's Reverse-Flow Control and then bragged about her power but was killed when she threw him the ball as it entered into "Crazy Mode" and exploded while he was holding it.

Pierre is assumed to have been at least high E-rank level as he was on the 35th Floor however he was unable to resist the effects of Baam's Fast Skip.[1]