Tower of God Wiki
Register
Don't have an account?
Sign In
Advertisement
in: Characters, Regular, Males,
and 4 more
English

Phonsekal Laure (폰세칼 라우뢰, Ponsehkahl Raurweh; or "Poncekal Rauloi") is a Regular and a talented Wave Controller of the Eurasia Family. He loves to sleep and goes everywhere with blanket and his pillows. Despite his sloth, he is an exceptional Wave Controller, capable of firing powerful long-range blasts.

Laure is a normal human-looking individual with dark green hair and green eyes. He tends to wear a blue jacket and a pair of grey pants.

Laure is extremely lazy and will take every single opportunity possible to sleep. He goes around covered in his blanket and is too lazy to even walk, instead using shinsu to float around.

He loves his pillow, as from his reaction when Baam found it for him. He only cares somewhat about the tests but is willing to use his powers to help get through them, as long as he gets sleep afterwards.

Though it isn't noticeably obvious, Laure does hold some interest in Baam due to his remarkable display of talent during the Position Test. He also has at least some desire to seek challenges, despite his laziness; when Anak revealed the power of Green April during the Crown Game, he wanted to keep fighting her and had to be dragged away by his companions. 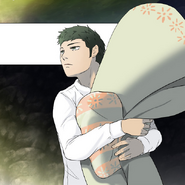 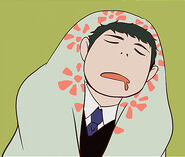 Laure turned up on the Second Floor with all the other Regulars. He passed the first test and teamed up with Ho and Serena Rinnen. He got through the barrier easily enough and got tired of the Door Test and simply opened a random door, passing the test.

In the Crown Game, he appeared to be half asleep, but he had, in fact, made a plan with his team. At the opportune moment, he attacked the team on the Throne with his shinsu, easily blasting away Ship Leesoo and Hatsu. He managed to hit Anak with a blast and told her to hand over the Crown, but she decided to fight and ignited her Green April, destroying everything in the process. Laure was quite upset afterwards and wanted to have another go at the Crown, but his teammates dragged him back, saying he would be crazy to go up against something that strong.

He was assigned the Wave Controller position and seeded first. He did not seem to pay attention in classes, but when Baam found his lost pillow for him, he agreed to tutor him in the use of shinsu. He was then put on Team A for the Hide-and-Seek Test. He spent most of the time sleeping and holding up signs that tell people to shut up. However, when it seemed they had almost won, he and Khun talked to Quant, and Laure blasted Quant up to the exit to catch Anak before she could get out,

causing their team to lose (this was all part of Khun's master plan, as Laure was on his "friends" list). He later held up rude signs behind Leesoo's back while Leesoo lamented their team's loss, causing Leesoo to attempt kicking him.

He participated in the Submerged Fish Test with the others, in which he used his shinsu blasts to force the Dogs to attack the Worms (he found the energy to do this when Hong Chunhwa and Sunwoo Nare held his pillows hostage). He then went off to sleep, only to be interrupted by a pair of Rankers from Wolhaiksong.

Laure was glimpsed a couple of times in Part II, while travelling with Leesoo's team.[7][8]

He reappeared on the 30th Floor for the Workshop Battle, slothful as ever (he was seen being carried around wrapped in his blanket like a backpack). He blasted shinsu through a wall during the attack on FUG's team to distract Yuto.

Laure was later summoned into the Development Tournament of the Workshop Battle. Rak took him to the Item Shop and proceeded to bite him, which forced him to wake up and notice Beta. Laure instantly saw the Medina hidden in Beta's head and used shinsu to irritate it and force it out of Beta's body. Afterwards, Laure reluctantly joined in the fight against Beta.

He was seen strapped to Hatsu's back when Leesoo's team was seen.

Laure was briefly seen complaining that he didn't like noise when Androssi noted the arrival of some interesting Regulars.

He did not appear to do much during his team's activities at the Name Hunt station but complained of tiredness after the events had come to a close.

[9]His style as a Wave Controller is conventional.[10]

Deductive/Reasoning Skill: Though his cognitive ability hasn't been emphasised, Laure has displayed some proficiency in thinking ahead.

Expert Shinsu Control: Laure has been noted and has shown himself to be one of the greatest shinsu manipulators out of his peers and has a great ability when it comes to knowing and controlling shinsu;[10] out of all the Regulars seen, Laure has the best and most efficient shinsu management abilities.[11] With his abilities he has been able to achieve a variety of feats and effects and will manipulate shinsu as the situation calls for.[10] In Part II, he was able to easily disrupt a parasite inside another person's body at range.[12]