Tower of God Wiki
Register
Don't have an account?
Sign In
Advertisement
in: Characters, Males, Rankers,
and 7 more
English

Phonsekal Drak has fair skin and green medium length hair. He is seen wearing a blue headband with red stripes and a white jacket with blue-collar and red strips as well.

Drak seems to have a lazy personality which was evident when he was first introduced sleeping on the job.[1] Later he was late for the battle thinking the Hell Train was stopped by Dorian Frog.[2] 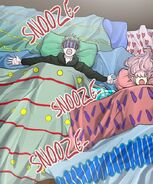 Phonsekal Drak and Kallavan's 4th army corp of Zahard's Army has arrived at the Last Station located on the 44th Floor waiting for the Hell Train to arrive. Drak overslept, which made Dorian Frog go out to battle in his stead. He later arrives at the battle to intercept Boro's team and sends them to prison excluding Phonsekal Irure because she is a family member.[3]

Being called an Advanced Rankers, which is the top 10% of Rankers, Drak is assumed to be very strong. He is very skilled in controlling many lighthouses as he was in charge of monitoring and recording the entire battlefield process and results. However, he was overwhelmed when Yu Han Sung used his splash damage skill, Raging Rapids and questioned whether Hansung was a High Ranker. This suggests that Drak cannot compete with people on the level of a High Ranker.