Beta
Partial Ignition: Phobos (포보스, Poboseu) is an ability of Beta as Living Ignition Weapon to summon a huge green demon-looking creature with three holes that fires 3 to 5 Baangs of Shinsu. This is an impressive feat for Beta, considering the Top 5 E-Rank Regulars can only produce 3 to 4 Baangs and Jyu Viole Grace only recently being able to use 6 Baangs.[1]

Phobos is used to attack the enemies from long range with Shinsu baangs. Phobos is very powerful for offensive purpose, because the attack resulted from Phobos 5 baangs can wreck half of summoning store tower. Beta was forced to use Phobos after Phonsekal Laure, Rak Wraithraiser, Yeon Yihwa, and Khun Aguero Agnis managed to delay him from destroying the summoning area, wasting his time before Viole can be summoned. He commented that he didn't expect to use this power.[1]

It seems that he can't maintain Phobos for a long period of time, since he had to charge directly to fight Viole in close range fight. But, Beta can still use Phobos again after a little break. He used Phobos and threaten to kill Viole's friends, but before he can fire all the Phobos Shinsu baangs, Viole wrecked Phobos with Straight-Line Long Pierce technique and eventually made Beta surrender after attacking him directly with Floral Butterfly Piercing Technique.[2] 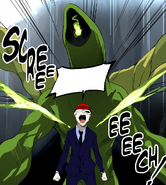 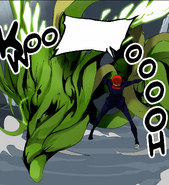 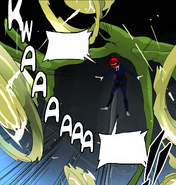 Retrieved from "https://towerofgod.fandom.com/wiki/Phobos?oldid=138889"
Community content is available under CC-BY-SA unless otherwise noted.