Pedro (페드로, Pedeulo) is the Chief Engineer (기관장, Gigwanjang) of the Hell Express[2] and a Ranker from FUG. He is one of Karaka's Servants.[2] His position is a Scout.[1]

He was killed by Ha Yuri Zahard after the Zahard Family issued a punitive order on Pedro due to "abuse of power" as the Train Chief during the events of the Dallar Show and threatened to kill Princess Yuri.[3][4]

Pedro resembled a Mexican-looking man with brown hair that draped down and framed his face, sharp cheekbones, a neat moustache and red, almost machine-like eyes. He wore a green jumper over a green shirt, brown gloves over his hands and brown trousers. He had medals of some sort on the left side of his jumper.

He seemed to be a composed, calculating man who strictly focused on furthering the goals of his master Karaka; to that end, Pedro showed great loyalty to his master. He had also been shown to be cautious as seen when Yuri approached him. 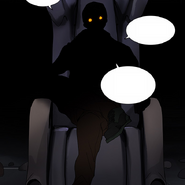 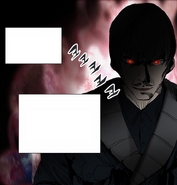 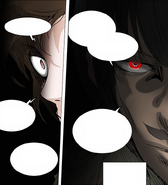 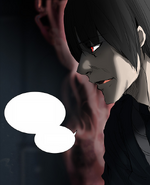 Pedro's moustache was briefly seen as he commended Poro Poe for getting them on the train before telling him to get back to work. When Daniel arrives at the Train's entrance Poro Poe states the Conductor of the Hell Express wouldn't depart from Train City until Ha Yura was on board (as she was the only reason he was helping them).

At the second Hell Train station, Pedro reasoned that a member of the Khun Family had attacked the train after it was halted by an impressive thunderstorm. Later, he put a stop to the fighting that was occurring at the train doors by teleporting all of the nearby Regulars to his office. He then introduced himself, adding he was a loyal follower of "Sir Karaka". He then informed the two Slayer candidates that only one of them could become the one and only Slayer candidate and a game would be played to decide who it was.

Hoaqin exclaimed that they promised to resurrect him but Pedro replied that no such promise was made, confusing the Slayer candidate. Pedro then explained that not every member of FUG was in favour of resurrecting him and that they had to be fair in deciding who became the one and only Slayer candidate. Baam reminded Pedro that he quit being a Slayer candidate but the conductor retorted that he had no choice in the matter before revealing the hostages he had. Pedro then told them they had a month to prepare and that the game would begin once they reached the next station, with the winner becoming the Slayer candidate and the losers would all die. He then transferred them all to their places.

When Poro Poe asked him why he was making them fight, Pedro explained that the situation had changed due to the events that occurred at Train City but assures that the result wouldn't change if they found Hoaqin's other parts.

A week before the match, Pedro finished talking to Karaka about their plans to kill Viole and ally with a former Slayer just before Yuri Zahard arrived, asking him if a particular Regular was aboard the train. After revealing she was a Princess of Zahard, to his surprise, she explained that she had come to see if "he" was alive under her father's orders. Realising it could become a problem if he made a rash decision, Pedro decided to include Yuri into his plans and told her that if she stayed to watch the match in a week, she may see the person she was looking for.

Pedro became more suspicious of Yuri Zahard when the Princess showed familiarity with Jyu Viole Grace, but she denied all allegations. With the rules of the Dallar Show explained, Yuri asked him what it meant by a "deathmatch" and Pedro replied by revealing the true nature of the duel as well as the fact that Twenty-Fifth Baam was actually Jyu Viole Grace, a FUG Slayer candidate. As a result, Yuri struck a riskily deadly deal with Pedro, which he accepted.

When the first round of the Dallar Show ended, Yuri taunted Pedro but the latter merely stated there were still two more rounds to go. During the second round, he mused on how everything was going to plan as Viole was lead away from his teammates. He then observed silently as Yuri complained about not being able to see Baam.

With the start of the third round, Pedro told Yuri that the game would be ending soon and asked if she was nervous however she confidently replied that she wasn't. With the reveal of Hoaqin's "clone", Yuri accused him of hiding something which he admitted before revealing their natures as parts of the former Slayer "White". Yuri and Evan then revealed their own secret, putting Pedro in a difficult situation. Being goaded into fighting, he and Yuri began their altercation with Pedro revealing the usage of the ancient Observer "Purple Dementor". However, despite its fearsome power and secret weapon, Yuri made quick work of it before giving Pedro himself a taste of her fists. Before succumbing to his injuries and dying, Pedro told Yuri that Baam would be swallowed up by the boiling acid regardless of whether he won or not. However, Yuri confidently replied that Baam would survive before demanding that Pedro tell her where Baam was.

Karaka arrived at Pedro's room and connected to his memories using Pedro's abilities as a Scout. Thanks to this, Pedro was able to inform his master of everything that happened, including the fact that Ha Yuri Zahard killed him.

Although Pedro can be assumed to be relatively powerful, since he is both a trusted subordinate of Karaka as well being in charge of the Hell Express, he was no match for a High Ranker of Ha Yuri Zahard's level. However, Yuri complimented him for being able to initially dodge her blows with her mentioning that he'd be good enough to join Zahard's Royal Guards.[5]