Vol.2 Chapter 107
Participant Summoning Waiting Room is a place on The Central Island for participating team members where they should wait for their team leader's decision to allow them participating in the Development Tournament of 30F Workshop Battle.[1]

This Waiting Room was used by The Workshop as the waiting area for members of the participating teams during the Development Tournament of the Workshop Battle. Team Leaders on the Central Island must "buy" or "purchase" their teammates with Points they obtained during the battle. Each teammates will be given value according to their abilities and strength. The more strong the teammate, the more expensive their points value. These teammates will wait in this waiting room, while they wait for their Team Leaders to "purchase" and summoned them onto The Central Island. Most of the time, the teammates will be summoned into the Teammate Summoning Center. On special case, if the teammate is considered to be an item and Human at the same time, Team Leader can summon his/her teammate in the Item Summoning Center.[2]

After Jyu Viole Grace defeated Beta, Lero-Ro explained his plan to rescue all of Baam's teammates into a Floating Ship used by Wolhaiksong. He also said that Khun Hachuling will teleport all of them by hacking the Summoning Well system inside the waiting room and connect it with the Shinsu Teleportation Device on the ship.[3] 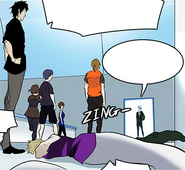 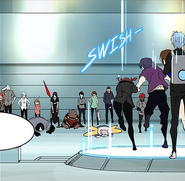 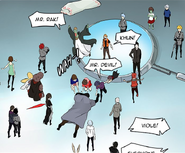