Vol.3 Chapter 1
Parasites (기생물, Gisaengmul) is an unusual race in the Tower. So far, there are only two parasites which had been seen throughout the Tower of God (series). One is the unnamed parasite which infiltrated Yeon Yihwa's body[1] and the other is Medina.[2]

The parasites which had been encountered seemed rather extremely weak and vulnerable. They have a worm-like form or "disgusting" form. Their size can be vary. According to Devil Bon, a parasite that he called Medina was fully capable of sentient thought to the point that it can became a Regular to climb the Tower.[3] In other words, it means that parasites can also be "chosen" by Headon, despite their unusual look.

The Parasites species have an ability to control people's mind. When put inside a victim, they resided in the body or the brain of its host where it tended to dominate and control those it infested, although a strong enough "will" could apparently resist its influence. Despite its form, they have been proven to be fully capable of sentient thought. 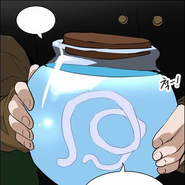