Tower of God Wiki
Register
Don't have an account?
Sign In
Advertisement
in: Characters, Regular, Females,
and 6 more
English

Pandit was an E-rank Regular of the Wave Controller position on Team Mad Dog. She participated with the rest of her team in the Workshop Battle.

She had long blue hair, white skin and hazel eyes. It was noted by Ron Mei that she took tests quite seriously, even when victory was near-certain.

Pandit had the ability to control at least 3 baangs of Shinsu at once,[1] something only 10 or so E-rank Regulars could do. Even while holding back, she and Grobin were able to hold off Cassano and Horyang. However, she is later easily defeated by Novick and Horyang.[2]

She is first seen at the start of the semi-finals of the team tournament battle. Standing on a hill with Team Mad Dog's Spear Bearer Grobin, she attacks Horyang and Cassano with blasts of Shinsu, buying time for an unknown plan.

She was sent to guard a back entrance to the Thorn's location and was engaged by Novick and Cassano. She, along with Grobin, was easily defeated by the two of them. 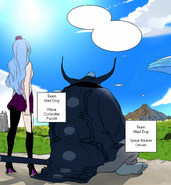