Pan (판, Pan) is a 'Low' level Test Ranker for the branch office of the Ranker Administration Office on the 50th Floor.[1]

He is lightly tanned, with grey hair and blue eyes. 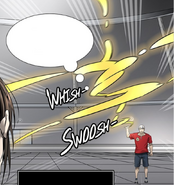 He is the Test Ranker that is set to fight Baam on the branch office on the 50th floor.

He is seen manipulating some yellow shinsu, but the nature, name, and strength of this attack are currently unknown.

After his defeat by Baam became widespread news, numerous Regulars immediately swarmed to his Administration Office to challenge him due to them assuming he was weak. However, Pan was shown to have easily defeated all of them, showing that his overall power was well above a Regular.