Vol.2 Chapter 328
Orange Snake (오렌지 스네이크, Olenji Seuneikeu) is a unique Needle that belongs to Charlie, a Ranker from Zahard's Altar. Charlie used it during the Battle of The Last Station to attack Twenty-Fifth Baam after he got paralyzed by Charlie's skill, the White Noise. Before the weapon managed to kill Baam, Princess Ha Yuri Zahard Teleported the Black March with her Shinsu Bubble, allowing the Black March to block the needle attack.

The Orange Snake Needle appear to have different shape than average normal Needle. The hilt or the handle stays the same, but the blade edge part can turn into Shinsu to attack the enemy from long distance.

The Orange Snake Needle is apparently a Transforming Weapon type, which means it has several forms that it change between, where this Needle has two forms. In its first form it is in clear shape, while in the other form the blade above handle turns into orange plasma state. While in the plasma state it can move quickly in zig-zag pattern to attack the target.[1] 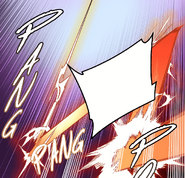