Tower of God Wiki
Register
Don't have an account?
Sign In
Advertisement
in: Characters, Rankers, High Rankers,
and 6 more
English

Nyono Wan (노노 완, Nino No Wan) is a High Ranker and also the Commander of the 3rd Division of Kallavan's 4th Army Corp of Zahard's Army[1] His position is Light Bearer.[2]

He resembles an alien with brown skin.

He was shown to be very cautious when an enemy approached their warship. Later he was confident in their commander's power against the enemy. 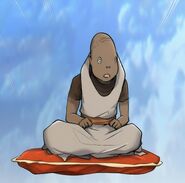 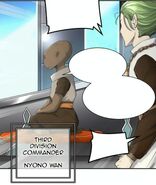 Kallavan and the third division were going to the last station. They encountered an enemy on the way and was told to leave the warship or else it gets blown up by an Anti-High-Ranker weapon. Nyono Wan asks if Kallavan know the enemy, and Kallavan responded: "well... a bit". Kallavan told the crew to stay put and that he'll deal with the enemy. The troops watched the fight some of them were worried because the enemy was very powerful, but Nyono Wan told them Kallavan hasn't used his real strength.

After Kallavan defeated the enemy with the help of a princess, the weapon that the enemy brought with him begins to charge up and is going to blow up the warship.

Division Commander Nyono Wan, along with two unnamed rankers, Ari Bright Sharon and Yolker was seen to attack into Twenty-Fifth Baam's direction after Kallavan requested his servants to focus attack on Baam. However, Cha was able to block all their attack and protect Baam.[3]

Not much is known except for the fact he can sense the power of the enemy and his weapon from a distance.