Tower of God Wiki
Register
Don't have an account?
Sign In
Advertisement
in: Rankers, Zahard's Army, Characters,
and 2 more
English

Nanatona (나나토나, Nanatona) is the Head of the Detached Unit and a Captain in the 5th Army Corp of Zahard's Army. She is a Ranker.[1]

She met Lo Po Bia Yasratcha at some point and was intimidated into service under him.[1]

She has grey hair, which gradually goes towards pink at the tips. She has three whiskers on each side, large mouse-like ears, long and thin mouse-like tail, which all makes her look like a mouse. The mouse imagery is reinforced by her floating on a large piece of cheese.

She is a bit of a scaredy-cat, being scared into joining the army and being scared away by Lo Po Bia Haratcha, which goes along with her mouse theme.[1] 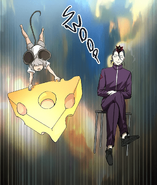 None of her abilities is shown so far, but she is a Ranker and should have a certain level of power.[1]

She is seen questioning why Haratcha is so eager to suck up to Yasratcha and claiming that Yasratcha is a monster, which annoys Haratcha and Lo Po Bia Ha Satcha. She is then chased off by Haratcha while being called a rat.[1]