Tower of God Wiki
Register
Don't have an account?
Sign In
Advertisement
in: Characters, Females, Rankers,
and 3 more
English

Ms. Ice Strawberry (얼음딸기, Eoleumddahlgi), whose name is currently unknown, is a Ranker, a member of Wolhaiksong and was in Ha Yuri Zahard's party of Rankers. It is implied that despite having the appearance of a young girl, she is quite old, as she refers to Laure as "Young Man". Her real name is unknown, as Khun stated that they were using "stupid fake names".

She and her partner return from scouting one of the possible routes Yuri's group could take. Confirming Evan's claims that the route through the White Steel Eels breeding ground was quickest she also noted that another fifth route was also fast.

She appeared on the Floor of Test with her partner where she encountered Laure who was ready to sleep. She asked why he was sleeping and he retorted irritably. Hachuling then connected to her and the two briefly conversed. After she and other members exclaimed that they wanted to have some fun like Yuri, Evan scolded them all and told them to sit tight. She then left quietly with the rest of the group.

Nothing about her is known, except that she is a Ranker. She is from one of the Eurasia Family's branch families and probably has innate shinsu control.[1][2]

She was seen scouting ahead for Yuri's team but her position is unknown. 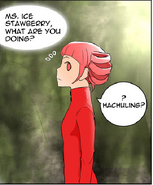