Mr. Neonbag (not his actual name, but just something Baam called him for some reason) is a Test Assistant in the Door Test. He and his team pretended to be a Regular in order to give hints to all the teams before they took the door-selection exam under the order of the Test Director Yu Han Sung.[1]

The hint was that in order to pass the test, whatever had to be done in the room must be finished before 5 minutes. The purpose of the hint was to help weed out the suspicious and untrustworthy test takers as they are considered dangerous to the Tower.[1] 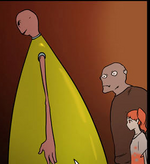