Misebichi (미세비치, Misebichi) was a Ranker, Third Tier Servant of Kallavan and a Regimental Commander in the 4th corp of Zahard's Army.[1] He was killed after he got caught up in the range of White's wide range powerful attack "Deathly Sword of Heavenly Spirits - White Magnolia".

Misebichi is a tall man with long, slicked-back black hair. He has a scar over his nose and left cheek. He wears a long, brown coat with white fur lining on the lapels and collar. Under the coat he wears a white shirt and black tie. 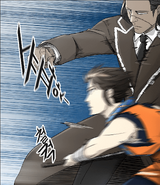 Misebichi was part of the Advance Team from the 4th corp of Zahard's Army, sent to the Last Station of Hell Train to carry out one of the Zahard's Orders.

After the train was stopped by other Rankers right before the entrance to the Last Station, Misebichi and Yuryu went to scan it. When Karaka suddenly stepped out of the train, Misebichi immediately used Shinsu Baangs to attack him. Then Yuryu rushed towards the Slayer, but they were interrupted by Ha Yuri Zahard. On order from the Division Commander, Misebichi and the other Rankers from Zahard's Army greeted the Princess of Zahard on the battlefield, as is customary. White then channelled a significant portion of his newly regained power to use his grand technique, Incinerating Deadly Spirits - White Magnolia, and this obliterated Misebichi.

When fighting Karaka, Misebichi was using at least eight Baangs.[2]