Medina (메디나) is a Regular from Parasites species that participated in The Workshop Battle (30F) by taking control of other Regulars.

Medina is a parasite that looks like a small white worm, snake or eel. It was stored inside a jar which brought by Devil Bon when he met Beta.

Since it was a parasite, it's unknown whether it has a personality or not. 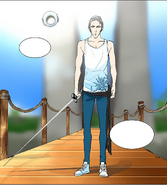 An unnamed Regular who was controlled by Medina before Beta 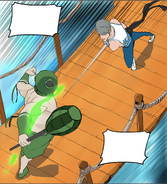 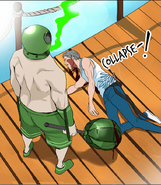 After the unnamed regular died, Medina escape from his body

Medina was chosen as a vanguard in the Workshop Battle's Development Tournament by Devil Bon. It entered the tournament by hiding in the body of unnamed Regular, who was defeated later by Boondawan. After the unnamed Regular was killed and his body was dropped in the river, Medina escaped and returned to Devil Bon.[1]

Devil Bon then planted Medina inside Beta so that he could participate in the tournament without breaking the rules. To Devil Bon's surprise, Beta was able to maintain control, despite Medina being inside his body.

During the Workshop Battle's semi-finals Beta intended to kill Viole's teammates while holding Medina. However, inside the Item Shop, Laure immediately detected the presence of the parasite inside Beta's body and thus induced vertigo so that Beta vomited the parasite out of his body. Beta tried to recover Medina but it was ultimately incinerated by Yeon Yihwa's flames.

By itself, Medina was extremely weak and vulnerable, due to its worm-like form. When put inside a victim, Medina then resided in the brain of its host where it tended to dominate and control those it infested, although a strong enough will could apparently resist its influence. Despite its form, Medina was fully capable of sentient thought.