Tower of God Wiki
Register
Don't have an account?
Sign In
Advertisement
in: Characters, Males, Rankers,
and 6 more
English

McCage (멕케이지, mekeiji) is a High Ranker and Vice Corps Commander of the 5th Army Corp in Zahard's Army.[2] His position is Light Bearer.[1]

He has silver skin and purple eyes, with several purple horns sticking out of his skull. Instead of hair, he has a layer of black skin/carapace on top of his head.

He is quite strict, as he was seen disciplining his subordinates.[2]

McCage was first showed to disciple all the Division Commanders of the 5th Army Corp, except Lo Po Bia Fucile who was not present. He is surprised by the sudden call for reinforcement during Battle of The Second Wall of Peaceful Coexistence after Baylord Yama's appearance. But McCage does not end up entering battle himself.

After Lo Po Bia Traumerei decimated The Nest with his Shinwonryu - All Creatures skill, the Family Head decided to leave by boarding Lo Po Bia's Battleship and intended to return home to the Lo Po Bia Family Mothership. After Traumerei left, all of his attack disappeared. It turns out that McCage was hit by the attack and died.[4]

As the Vice Corps Commander of 5th Army Corp under Yasratcha's command, McCage is a High Ranker, so he is quite powerful. But since his Position is a Light Bearer, McCage abilities relies more on Lighthouse control, defense and utilities. He was never shown fighting in close combat. McCage is arguably as strong as Elpathion who held the same military rank as him. This reinforced by even the rambunctious Lo Po Bia Haratcha being humble and respectful towards him.[2] 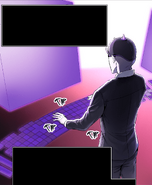 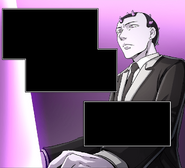