Tower of God Wiki
Register
Don't have an account?
Sign In
Advertisement
in: Characters, Rankers, High Rankers,
and 3 more
English

Madoraco (마도라코) is a High Ranker with the sobriquet "Grey Catfish" and is known for being a master businessman. He was working with Io and Punk to raise money from the tournament for their Workshop research but later betrayed them. A silhouette with his appearance was shown among the FUG faction that opposed Jyu Viole Grace gaining Enryu's Thorn.

He is a very short man that has pale pink hair that is combed back and a pair of black horns protruding from his head. His skin is pale, his eyes are yellow, and he has large marks near his mouth that makes him seem to have a smile at all times. He also dresses in a black suit, which together with the wand he carries, gives him the appearance of a magician.

He is the leader of the Grey Catfish Merchant Association and is an expert businessman. He is a calculating man and is particularly interested in money. According to Io and Punk, he is allied with dangerous people.[1] 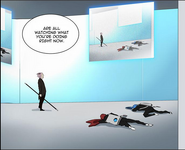 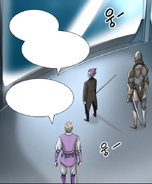 Madoraco appeared before the Workshop moderators telling them they could earn a lot of money to complete their research by using a betting system in the Workshop Battle and not to worry about if the director found out, as he would take care of everything. He then told his subordinates that soon Jyu Viole Grace would be in their hands.

His silhouette was later seen among the Slayers and Elders in FUG who opposed the young Slayer candidate being granted Enryu's Thorn.

Madoraco watched on and mused about how Viole's friends were attempting to escape during the Workshop Battle and thought about making a move even if there would be some collateral damage. Suddenly one of Madoraco's subordinates entered his room to tell him that a messenger from the Tournament area had arrived causing the Grey Catfish to question who the messenger was. He and the messenger later revealed to be Beniamino Cassano, make a trade and later Madoraco conversed with his attendant, saying that the information they received from Reflejo via Cassano was more useful than holding the deal with the Workshop Researchers. He then ordered them to prepare the Boiling Acid dissolving solution as they were going to strike Viole and his allies before they could escape. He finished by saying it was time to end the tournament.

Shortly after Viole defeated Reflejo, Madoraco sent one of his Rankers to the Archimedes' tail to drop the dissolving solution to create their ultimate weapon. Seeing the solution being dropped, Punk and Io confronted Madoraco with the latter revealing that he had given their promised reward to someone else since he had received a better offer. The two Workshop moderators were riled and drew their weapons but Madoraco easily defeated them.

Soon after, a figure appeared and greeted Madoraco, greatly unnerving him. This figure turned out to be Po Bidau Gustang, one of the leaders of the 10 Families. After conversing about Gustang's involvement in the current affairs, Madoraco told all his FUG associates to withdraw and meet back at their headquarters before Gustang destroyed them all.

Hwa Ryun explained that Madoraco's group and he were the ones who had Viole's Thorn fragment removed from the Floor of Death. She added that he was rumoured to have another one of the fragments, and as his relationship with FUG had deteriorated after the Workshop Battle, he was looking for a buyer.[2]

After Hwa Ryun contacted Madoraco, he came to 44th Floor in his special suspendship, called The Ghost Ship, with the intention of acquiring the Soul-Stirring Ladle.

After cloaking the Regulars using his special ship, Madoraco has a talk with his bodyguards explaining that, even though he's a man of business, the smartest thing to do in that situation was to loot the Regulars, considering they were alone. Mere seconds after giving that order, Karaka, Evankhell, and White all teleport in front of the ship together, greatly surprising Madoraco.

Karaka asks Madoraco if he's heard from any of the other slayers after the massive battle that took place at the Last Station, but Madoraco reminds Karaka that they don't communicate, regardless of the events. During this conversation, Madoraco reveals the name of a new Slayer, Pephomemore Seto, stating that even he "went to sleep".

Madoraco asks Karaka if he has the Soul-Stirring Ladle, explaining that he was offered that item in exchange for hiding the station with his ship. Karaka offers the Ladle in exchange for information about Baylord Yama because he doubts the Elders would support him and there aren't many slayers that could stand against a Squadron of Zahard's forces. Madoraco accepts this deal and gives the information about Deng Deng to Karaka.

Madoraco is a High Ranker who probably possesses a decent level of strength. He was able to effortlessly take out Io and Punk during the latter events of the Development Tournament.[3]

Being the leader of the Merchant Association, Madoraco has a great amount of influence. He owns a special suspendship, called The Ghost Ship, which has an ability called Invisible Area, which can make objects in its area of effect disappear.[4]