Maddox is one of the Workshop Researcher and also a scientist and manager in charge of Living Ignition Weapon experiments involving Kang Horyang and Beniamino Cassano.[1]

He resembles a green humanoid lizard but with numerous orange eyes in his head. He has a thin tail.

Maddox is one of the shady scientists of the Workshop who will do anything to complete his research, even to experiment with human without their consent.

Maddox was part of the team that developed Living Ignition Weapons. Though not much is know about him, he was the responsible of injecting the devil that resides in Beniamino Cassano and Kang Horyang's bodies. After the experiment’s success of creating the first two Living Ignitions Weapons in the Tower, he was assigned to transfer Horyang to a different location. During that travel both Maddox and Horyang met with Headon. It’s unknown what happened after that but after meeting with Headon, Horyang woke up as a Regular on Evankhell’s Floor. 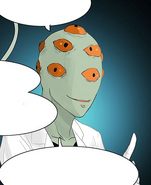 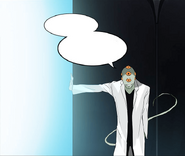