Lobi is one of the experiment test subjects of The Workshop, where he came from the same place as Lo Po Bia Yasratcha and Baylord Wang Wang. Lobi apparently was also captured following the order of the Family Head Lo Po Bia Traumerei who requested The Workshop to collect/gather all of his "pets" who were climbing the Tower.[1]

Lobi first appeared inside the Lo Po Bia Family Mothership during flashback history between Yasratcha and Wang Wang. He met Yasratcha in a hallway and complained about Lo Po Bia Family who stole his freedom and the treatment that were received by the Beastkin species.[1]

Lobi was also present on the battlefield when the Lo Po Bia Family fought Akrinak.[1]

Not much information known about Lobi at the moment. But he also managed to become Ranker after climbing the Tower.[1] 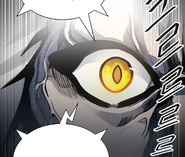