Tower of God Wiki
Register
Don't have an account?
Sign In
Advertisement
in: Characters, Females, Regular,
and 5 more
English

Lo Po Bia Shilial Zahard[1] (로 포 비아 시랄 자하드, Lo Po Bia Siryal Jahad) is one of the twin Princesses of Zahard from the Lo Po Bia Family.[1] She and her twin sister are considered the strongest of the Top 3 D-Rank Regulars.

Shilial has long pink hair arranged into a ponytail and her pupil-less eyes are the same tone of pink. Both her and her sister wear outfits, reminiscent of seifuku, which have a mainly black colour scheme; Shilial wears pink heels.

Shilial is more outwardly respectful than her sister but seems to hold a similar crazy nature much like Lilial. 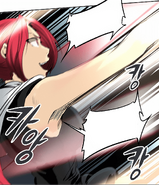 The twins mused over Jyu Viole Grace's appearance at the station, as well as the other noteworthy Regulars arriving at the station. One of them then noted that things would get interesting. Later, after Kaiser came back from challenging Viole, the twins noted that Kaiser had come back without Viole's name. While overhearing Kaiser's plan to get rid of Androssi and Viole simultaneously, they acknowledged that it was a good plan.

While Team Leesoo were executing their plan to rescue the hostages, the twins observed their movements from above. Shilial later revealed herself and directly engaged Hatsu in a fight. Despite initially dominating their bout, she was surprised when Hatsu unveiled and attacked with his other sword. Calling Hatsu's bluff about his sword being un-ignited, they were interrupted by the arrival of Ship Leesoo who revealed his knowledge about the Bia twins' links to the duelling Princess factions on higher Floors. Impressed with his knowledge, Shilial then informed them that they were actually siding with another Princess: Khun Maschenny Zahard. Shocked by the revelation, Shilial then left the two after finding out Kaiser had lost to Jyu Viole Grace, but not before warning Hatsu not to arrogantly cross her again.

Alongside her twin sister, Shilial is considered the strongest of the Top 3 D-rank Regulars.[1] She possesses a pink Arms Inventory that holds a pink basket-hilted needle.[2]

Swordsmanship Practitioner: Shilial mentions that she briefly learned sword fighting when she was younger but gave it up as she states she had no talent in it.[2] Despite this, she proved proficient enough to push back the experienced and skilled swordsman Hatsu in single combat, even able to criticize Hatsu for what she perceives to be a lack of powerful skills.[3]

Enhanced Physical Prowess: Due to being both a member of the 10 Great Families and a Zahard Princess, Shilial is shown to possess remarkable superhuman levels of physical strength, speed and durability. During her fight with Hatsu, she was easily able to prove herself physically stronger and faster, pushing him back and even easily blocking a powerful attack from the skilled swordsman that left him astonished with how easily he brushed off the attack before pushing him back with a strong stab that damaged Hatsu's sword with the impact.