Tower of God Wiki
Register
Don't have an account?
Sign In
Advertisement
in: Characters, Females, Regular,
and 5 more
English

Aware of Androssi Zahard helping the fugitive Anak Zahard in climbing the Tower, Lilial contacted Androssi and proposed a game between them: if she went to the Name Hunt station and took Kaiser's name, the Lo Po Bia Family would not interfere with Anak ever again and they would even hand over Lo Po Bia Ren's life.

Lilial has blond hair arranged into pigtails tied by black bows. Her eyes are sometimes yellow[3] and sometimes blue.[2] Both her and her sister wear outfits, reminiscent of seifuku, which have a mainly black colour scheme; Lilial wears black heels.

She is a haughty girl who pridefully revels in her crazily ambitious nature. Shilial noted that Lilial seems to really hate Androssi's guts.[4] 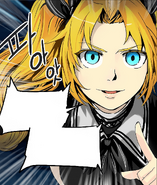 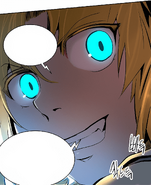 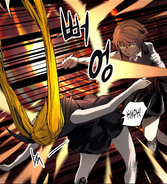 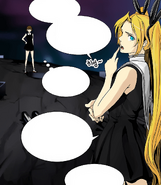 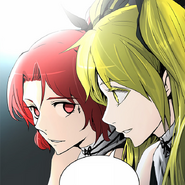 The twins mused over Jyu Viole Grace's appearance at the station, as well as the other noteworthy Regulars arriving at the station. One of them then noted that things would get interesting. Later, after Kaiser came back from challenging Viole, the twins noted that Kaiser had come back without Viole's name. While overhearing Kaiser's plan to get rid of Androssi and Viole simultaneously, they acknowledged that it was a good plan.

While Team Leesoo were executing their plan to rescue the hostages, the twins observed their movements from above. Lilial later revealed herself and directly engaged Androssi in a fight before letting Androssi know her ambitious plans.

Alongside her twin sister, Lilial is considered the strongest of the Top 3 D-rank Regulars.[1] She is able to keep up with and pressure her fellow Princess, Androssi Zahard, with ease and fights with a style that primarily uses kicks.

Lilial has also shown the ability to generate and fire off huge balls of Shinsu using a kicking motion.[5]