Tower of God Wiki
Register
Don't have an account?
Sign In
Advertisement
in: Characters, Females, Regular (D-Rank),
and 2 more
English

Lee Soyong and her brother, Lee Sowa was a Regular who boarded the hell train in the past. They ran away from the train and have been living in hiding. But they didn't do that because they wanted to. Seeing the Regular are killing and competing with each other, it's terrifying them.

One day, Soyong hurt her ankle in a fight with a Guardian on the train, and her brother was afraid that she would get hurt or killed in the battle, so they went into hiding to keep that secret from everyone on the train. Luckily they survived and arrived at the Last Station. They felt so grateful to Xiawun for welcoming them, and they were so taken by the peace at the station that they were settled. Xiawun then adopted both of them as his children.[2]

Soyong is an emotional young woman. She genuinely respected her father's wish, to create a paradise free of competition for Regulars, a true resting place for those who survived until the end of the Hell Train. She criticized her father after he gave in to the intimidation from the official of Zahard Empire.[3] 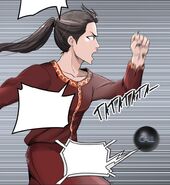 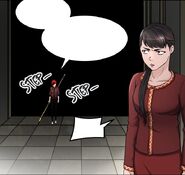 Lee Soyong vehemently argued with her father about following the orders from Zahard's Army. After criticizing him, he stripped her of her rights as a ruler of the Dome. After that, she tried to persuade Ryu-Ahn to not close the dock door.

After the dock was closed, she went to search for Ryu-Ahn. She found Levy instead, and with just one question from him, she was afflicted by the Question Mark Curse. Before the curse could kill her it was broken thanks to arrival of Twenty-Fifth Baam. Afterwards she found Ryu-Ahn dead.

After the loss of her friend, Soyong was even more determined to stand up and fight against Zahard's Army. She offered her help to Baam and Androssi, and she was even willing to lend a suspendship. When Hwa Ryun showed up, Soyong led Baam and the rest of his companions to a luxurious suite and promised to help them as much as she can.

Later, she was navigating Baam through the Last Station to the warship, which he would use to go to save his friends.