Tower of God Wiki
Register
Don't have an account?
Sign In
Advertisement
in: Characters, Rankers, Males,
and 4 more
English

Kurudan (쿠르단, Kooreudahn; Kurdan; "Kurudan") is a Ranker and member of Wolhaiksong. He travelled with Yuri Zahard and her group, whose objective was to navigate the more dangerous parts of the Middle Area in order to infiltrate the Second Floor so she could retrieve the Black March.

Kurudan's body is gigantic, being at least 4 meters tall. He has white hair, red eyes, brown skin and 3 long scars across his face. He also carries a gigantic hammer. 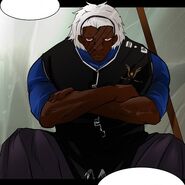 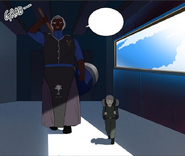 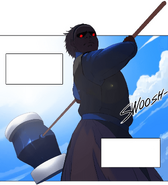 Kurudan accompanied Yuri's group in order to infiltrate the Floor of Test, seeking the Black March. Kurudan believed Yuri and the other Rankers who accompanied her would going to start a war with Evankhell, yet he seemed disappointed when Evan Edrok scolded him for thinking so. Along the road, though in doing so might've had to venture along a road where there was a herd of Steel Eels present, implying the road had a high density of Shinsu. Kurudan claimed to Yuri that if there was someone capable of moving freely around it, he would happily give them his emblem of the Wing Tree. Yuri replied that when they arrived at their destination he would have to be prepared to give away his emblem of Wing Tree (this symbol was given to be recognized as a Wolhaiksong member; it is unknown what state or rank Kurudan has within the organisation).

When Kurudan arrived on the Floor of Test, he wound up facing Ren on Yuri's command. As a Princess, Yuri was not allowed to attack anyone who worked for the Zahard Empire unless authorized by the King. Hence, she needed someone to act on her behalf, to avoid any political complications. As a result, Kurudan adopted her place as an opponent and crushed Ren enough to incapacitate him.

However, after Kurudan defeated Ren for Yuri, she instead gave his Wing Tree feather to Leesoo, before telling him to give the feather to Baam.

Kurudan is a Wave Controller, with the special position of Dansulsa. He was able to incapacitate one of Ren's bodies with one Dansul-enhanced blow.