Tower of God Wiki
Register
Don't have an account?
Sign In
Advertisement
in: Characters, Rankers, High Rankers,
and 2 more
English

Ruler of the 44th Floor

Khun Royale Elliot (쿤 로얄 엘리엇, Kun Loyal Ellieos) is a High-Ranker and the Ruler of the 44th Floor. He is also a member of the Khun Family.[1]

Elliot has pale skin, blue eyes and hair, and has two horns on his head. He was shown wearing a hoodie and athletic pants and shoes. 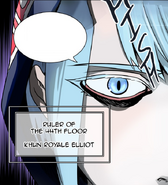 When Evankhell was causing a commotion at the Last Station, Elliot initially let Zahard's Army handle the situation. However, due to the massive amount of damage Evankhell was causing, his patience ran out and he went out to the battlefield himself. Elliot told Evankhell to get out of the 44th Floor and blasted everything around him with ice.

Elliot uses ice Shinsu. He was able to blast Evankhell's flame away after she released her partial ancient powers.