Tower of God Wiki
Register
Don't have an account?
Sign In
Advertisement
in: Characters, Males, High Rankers,
and 4 more
English

Khun Marco Asensio (쿤 마르코 아센시오, Kun Maleuko Asensio) is a High Ranker of the Khun Family. He is one of the direct sons of Khun Eduan[3] and widely known with the nickname of 'The Spear Master'. [2] His appearances were revealed as a data version on the Hidden Floor back when he was still a young boy, as a Regular climbing the tower.

At some point, after clearing the Hell Train, he arrived on the Hidden Floor and left data of himself in it. He seems to hold some position of power in the Khun Family as Khun Aguero Agnis recognised him as the Spear Master. As a generated sworn enemy of Aguero Agnis, Khun Kiseia later confirms this by saying that he became a High Ranker outside of the Hidden Floor and formed his own faction within the family.[4]

As a member of the Khun Family, Asensio possesses the natural traits of the family: he has blue hair, blue eyes, and pale skin.

In his appearance as a Data in the Hidden Floor, his hair is short and seems to be darker than the usual norm, having a sapphire colour instead of a lighter blue. He has two earrings in the form of blue rings. He has a tattoo on the bottom of his right cheek and continuing on his neck, the tattoo consists of 5 diagonal blue squares. He was dressed in a navy blue turtleneck with deeper blue sleeves, dark blue pants, grey socks, and black shoes.

In Part III, the present Asensio is introduced wearing a dark blue hooded cloak with orange and teal details that was also worn by Maschenny’s other subordinates. His hair grew noticeably slightly longer and he has no facial markings unlike his Data version. Underneath his cloak, he wears a black leather sports jacket, dark grey baggy pants, bright blue belt, white socks and black shoes. His earrings are longer and resemble a horn-like shape.

Asensio also seems to like bubble gum a lot. Not much is known about his personality besides that on the Hidden Floor: Data Asensio. 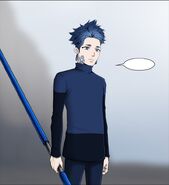 Team B goes to the hidden stage of Sweet Castle. Batis uses the ice cream cone to communicate with data Khun Eduan, saying that "that person" is here so Eduan could join the fight against Big Breeder and data Zahard. After Eduan listens to the message, he orders Asensio to bring them to the stage he is on. He then appears next to Batis using a mirror. Batis explains that "that person" is not among Team B and is on another stage in order to deceive Big Breeder. Asensio then comments that all they need to do is finishing the quest in order to see "that person". He tells Boro to pick the hardest quest and promises to finish the quest for Team B. Asensio easily defeats the villain and completes the grand quest. He reveals that Khun Eduan doesn't like waiting and hates nuisances and that only three of the Khun Family whom Khun Eduan likes are with him. According to him, Eduan is a very self-centred person and most of his children don't like him. Nearly all of the people who comes to the Hidden Floor and meets Khun Eduan don't leave. Within two days, Asensio leads Team B to the Palace of Spears only to find out that Khun Eduan already left because he was impatient of waiting. Team B meets data Khun Maschenny.

As someone who has reached the Hidden Floor and has gotten Khun Eduan's approval while being one of his direct sons, Asensio is very strong. As a data of himself on the Hidden Floor, he manages to clear the entire grand quest on his own without Team B's help in just two days. On top of that, Khun Kiseia (as a generated sworn enemy of Aguero Agnis) says that he became a High Ranker on the outside of the Hidden Floor and that he formed a faction of his own within the Khun Family. He is famous for using his spear like a flying fish. It was known as the 'flying fish spear skill'.[4]Both blades at the end tip of his spear will fall off and fly around and attack the target. The blades will attack very quickly countless times with rapid rate. Big Breeder Jeok was even surprised and said that why he felt 'like fighting hundred of blades' when in reality it's only two blades.

The skills presented below are from the Data Asensio, meaning that these skills are probably much more developed as of now.