Khun Icardi (쿤 이카르디) is a member of the Khun Family. He is one of the direct sons of Khun Eduan and also one of the three children who were allowed to serve his fathers on the Hidden Floor.

After clearing the Hell Train, he arrived on the Hidden Floor and left a data version of himself behind.

Given that he is from the Khun Family it can be assumed he has the same blue hair and eyes as all his other family members.

Icardi produced armors from his spells 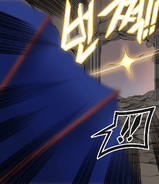 Icardi specializes in using spells, which he creates by speaking in an unknown language, usually performing them from the backline while a Fisherman is protecting him. [1]