Tower of God Wiki
Register
Don't have an account?
Sign In
Advertisement
in: Characters, Rankers, Males,
and 4 more
English

Khun Hachuling, or simply just Hachuling (하츨링, Hahcheulling, Hachling, "Hachuling"), is a Ranker, a defected member of the Khun Family and one of the numerous children related to Khun Eduan. He is also a member of Wolhaiksong and is sometimes referred to as "Blueberry". His Position is a Scout.[1]

Hachuling claims that since joining Wolhaiksong, he has separated himself from his birth family.[3]

Similar to other members of the Khun Family, he appears to have pale skin, pale blue hair and blue eyes. 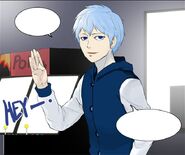 Hachuling and some other members of Wolhaiksong travelled with Ha Yuri Zahard to get to the Floor of Test. He was first seen playing on what looked to be a portable games console while Yuri waited to confirm which was the quickest route to get the Floor of Test.

On their way to the Floor of Test, their group set up camp on the corpse of an enormous Shinheuh with Hachuling playing on his games console still.

During the Submerged Fish Hunt Test, Hachuling broke into and then hacked the Lighthouses of Khun Aguero Agnis to find his friends who were scattered throughout the 2nd Floor. After finding them and realising Yuri was getting ready to take someone on, he complained he wanted to have some fun too but Evan Edrok iritatedly told him to calm down. When all the action ceased and Hachuling readied to leave, Khun asked if they were brothers and the former answered in a roundabout way causing Khun to claim he would one day rule the Tower with the name "Khun" on his back. Hachuling then told him he'd look forward to it but first, he had to rule his own Lighthouse. After leaving the Lighthouse, Hachuling commented to himself that Khun was cute.[4]

When Lero-Ro and Quant Blitz arrived at the 77th Floor, they encountered a big jungle forest. They saw a small building that turns out to be a game arcade shop. Hachuling appeared from ventilation system and introduced himself as the owner of the building. After playing arcade games against Quant and defeated him, Lero-Ro challenged Hachuling after he found out about his identity through hacking. Before the two could fight, Hachuling was interrupted by a call from Yuje. He then decided to hire Lero-Ro and Quant as 'interns' to conduct some work he was initially assigned by Yuje during the call under the premise that he'd take them to Wolhaiksong main base if they succeed.

Lero-Ro mentioned having a teammate onboard Archimedes who was skilled in "hacking" and planned to hack the Summoning Well inside the Participant Summoning Waiting Room and summon Khun Aguero Agnis, Twenty-Fifth Baam, Ship Leesoo and the rest of their teammates to their Floating Ship. This skilled hacker, of course, turned out to be Hachuling who previously received a mission from Yuje to watch over the new Slayer candidate. He also hacked into the cameras in Archimedes and the arena, putting the shameful deeds of FUG on the broadcast that was prevented because of Po Bidau Gustang's intervention.[5]

Hachuling, Lero-Ro, and Quant had a discussion regarding the aftermath of the Workshop Battle, realising that everything may have gone according to the plans of someone higher up as the broadcast failed to go through. Hachuling then suspected the possibility of it being for the sake of keeping the Slayer candidate safe. He then claimed to have been to the Hidden Floor in the past when Quant brings up the Hell Express.[6]

Despite his primary Position as a Scout,[1] Hachuling apparently also has ability to control Lighthouse to certain degree. He can use an advanced Lighthouse technique like the Lighthouse Teleportation.

Hachuling is very skilled at hacking. This skill was first shown when he came to the 2nd Floor when Ha Yuri Zahard tried to retrieve the Black March from Twenty-Fifth Baam. Hachuling was seen to hacked and override the Lighthouse of Khun Aguero Agnis with some kind of gaming console.[4] In the Anime adaptation, Hachuling turned off the camera and TV screen to prevent Lero-Ro and Quant Blitz watching over him.

During the 30F Workshop Battle, Hachuling was shown wearing a green helmet and he was able to hack into the computer system of Floating Castle Archimedes. He hacked all the cameras and live broadcasted the murder event done by Madoraco, who killed Punk and Io, two officials staff of the Workshop Battle.[5]

When Ha Yuri Zahard confronted Lo Po Bia Ren on the 2nd Floor during the Submerged Fish Hunt Test, she ordered Kurudan to attack Ren because she cannot attack him due to her position as a Princess and to avoid rules violation towards the royal order of Zahard Empire. Hachuling sent his Lighthouse to support and Kurudan quickly launched a powerful attack with his hammer and strike on top of the Lighthouse. Kurudan's attack was teleported into Yuri's location and it crushed Ren's body to death.[7]