Khun Devo Ferez (쿤 데보 페레즈, Kun Debo Pelejeu), is one of three mysterious people sent by Khun Maschenny Zahard to participate in the Gakja Dosaeng game in The Nest.[1] It turns out that he is a Ranker and subordinate of Khun Marco Asensio and he also followed Asensio into The Cat Tower. After hearing the announcement from McCage that the Cat Tower will explode, Devo was sent by Asensio to search the bomb location to prevent the explosion.[2]

Similar to other members of the Khun Family, he appears to have pale skin and pale blue hair. However, quite unusual for a Khun he has light brown eyes instead of the usual blue eyes.

Devo Ferez says he was sent by Khun Marco Asensio, referring to him as "Lord" making him a subordinate in the Asensio faction of the Khun Family.[2]

Devo Ferez extracted the information about the hidden bomb inside The Cat Tower after he caught Nanatona,[2] before relaying this information to several of the rankers allied to Twenty-Fifth Baam leading to Cha chasing after Lo Po Bia Fucile who was revealed to be the human bomb of High Ranker level.[3].

Devo wields a spear, but not much more is known about his power other than him being able to overpower Nanatona.[3] It looks like he also had Observers floating above his shoulders, which indicates that he might be a Scout. 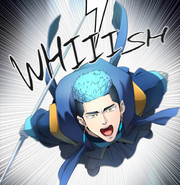