Khun Aguero Agnis (쿤 아게로 아그니스, Khun Ahgehro Ageunis; or "Kun Agero Agnis" or "Khun Aguero Agnes") is a C-Rank Regular from Khun Family, and is often referred to simply as "Khun". He is a best friend of Twenty-Fifth Baam, one of the main protagonists of Tower of God.

He is one of many "defected sons" of Khun Eduan. He was expelled from the his family because his older sister failed to become one of Zahard's Princesses. He teamed up with Baam and Rak and passed multiple tests with them. He was assigned the Light Bearer position and showed clear talent in the field. He is a highly cunning Regular, who manipulates rules of tests to suit his needs.

A few months after the shut down of the independent Tower of God android game by Neowiz Able Studio, a mobile game "Seven Knights" announced the game collaboration with Tower of God characters. Seven Knights decided to present four characters of Tower of God that includes Enryu, Yuri Zahard, Khun Aguero Agnis, and Twenty-Fifth Baam. This game collaboration itself more likely a marketing purpose for Koreans, in order to increase the popularity of the Tower of God webtoon, because these characters are only available at the Korean server, not the global one. For more info about the details of Khun as a game character, please visit Seven Knights Wiki (Khun). 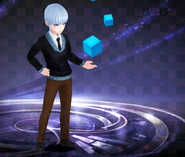 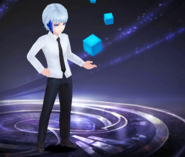