Kay joined the Zahard's Army together with Jay and Weye. At some point, he had a marriage arranged with a daughter of Yeon Family.[2]

He has fair skin, blue hair, blue eyes, and is seen wearing a white jacket with grey pants.

He appears to be very arrogant, saying that he could have taken down someone who called himself a Slayer from FUG. Kay is also reckless, looking for the strongest present enemy.[3]

As shown from the battle in The Nest, Kay was also shown to be very persistent and somewhat dense, this is seen where he clearly did not learn from his previous defeat against Evankhell and persistently attempted to defeat her despite it being clear that he was severely outmatched. Ending him in again, being violently being blasted away by the latter once again. 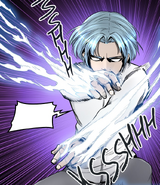 Khul Nissam Kay arrived at the Last Station together with his first division and Elpathion, assistant commander in 4th army corp.

After greeting Princess Yuri with his superior Ari Bright Sharon, he was excited, hoping more FUG's members will show up. Meantime Kay was mocking Dorian Frog for poor performance. When one of the warships exploded and someone new appeared, Kay immediately jumped to battle them. He went straight for Evankhell, sensing she was the strongest out of the group of newcomers. His attack was stopped easily by Evankhell and his weapon shattered. When Kay was about to attack her again, he was sent flying with a flick of her fist.

He is assumed to be very strong as he is an Assistant Commander and was excited to fight FUG.[3]

In terms of power, he is like a fly compared to Evankhell, with her commenting that Zahard's Army is valuing family background too much, which imply Kay's high rankings and status was obtained by his family's influence and less likely his strength. Despite this however, Kay has at the very least showcased above average durability and stamina, this is seen where he had survived being swatted away by Evankhell twice.