Tower of God Wiki
Register
Don't have an account?
Sign In
Advertisement
in: Characters, Males, Canine People,
and 3 more
English

Katu (카투, Katu) is a Canine People who served Baylord Yama a long time ago before the Canines civil war between Yama and his brothers (Baylord Doom and Baylord Paul). Yama cared so much about him. Katu was killed by Doom after he mocked Doom that he didn't deserve to lead the clan.[1]

Katu come to face Yama to talk about the crisis on their side against Doom's side in deciding the leader of canine people. Katu complained about the fact that three of Yama's most trusted rankers have died committing suicide in the last year for no apparent reason. Katu suspected that Lord Doom has killed them all silently to reduce Yama's influence and keeping Yama under control. Katu have decided that Doom has no right to lead anymore and he wanted Yama to replace him. Yama refused Katu, saying it's too much of a hassle for him and telling Katu to leave his side too if he want. After they both left, Katu went to complain and mocks Doom right in front of him and he was killed.[1] 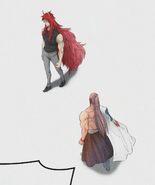