Vol.2 Chapter 109
Karaka's Hideout (카라카의 비밀 거처, Kalakaui Bimil Geocheo) is a place or a castle used by Karaka, a Slayer of FUG as his secret hideout or headquarters. This place is located on the 97th Floor.[1]

Ha Jinsung approaches Karaka's Hideout and encountered two giant humanoid guards at the gate. The guards asked who he is but Jinsung effortlessly knocked them down on the ground. When he stepped inside, there are many people charged to attack him, but Jinsung can easily beat them all. Jinsung eventually reaches a room where Karaka was seen sitting on his throne. The two powerful figure then converse about the 30F Workshop Battle incident. 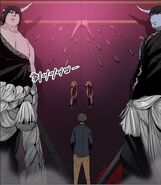 Jinsung in front of the gate 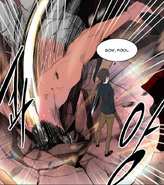 Was that supposed to hurt?

The effects of a "real punch" 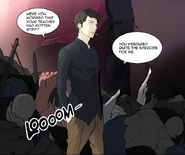 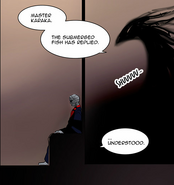