Karaka's Armor Suit (name unknown) is a special gift given by Ha Jinsung to celebrate Karaka's achievement in becoming a FUG Slayer at such a young age. It is also to replace Karaka's old armor suit that he has been wearing for ages.[1]

At some point after Karaka officially become a FUG Slayer, Jinsung visited Karaka and gave him the armor suit.

This armor's durability is apparently very strong and very sturdy. When Karaka was first seen to fight, his opponent is straightly Princess Ha Yuri Zahard who is also a member of Ha Family which is known for their physical strength. When Yuri was about to land her Nuclear Punch technique, Karaka quickly crossed his arm to block that attack. After receiving such a powerful punch, the armor which covered his entire arm didn't break or shattered at all.

Technically, this armor suit isn't entirely invincible and can be destroyed. Like in the case when Karaka meet Yuri again at the Battle of the Last Station, Karaka's body was melted with Yuri's green Shinsu Bubbles, which means, the attack also probably damaged the armor along with his body.[2] This also happen when Karaka's body was destroyed by one finger of Urek Mazino. However, since the armor suit can mysteriously regenerate along with Karaka's body, then perhaps, it can be count as invincible.

Armor Spell: It seems like the armor suit have some kind of Spells that protected his armor. It is unknown what kind of spell that was used, but Karaka mentioned something about having an armor spell.[2] 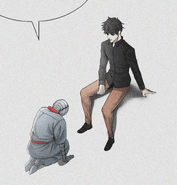 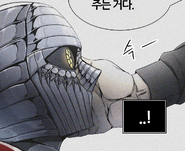 Retrieved from "https://towerofgod.fandom.com/wiki/Karaka%27s_Armor_Suit?oldid=147883"
Community content is available under CC-BY-SA unless otherwise noted.