Jordan (조든, Jodeun) is a Canine People who served FUG Slayer Baylord Yama in The Cage. He is an Advanced Ranker and No.8 in Yama's Gang.[2]

Jordan is pale-skinned, muscular and has short green hair and eyes.

He likes fighting very much. Because of that, he is called "fighting maniac". Although he is crazy about fighting, he still follows some rules. He is fair towards Regulars, he fights them with one hand.[3] 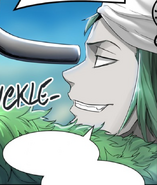 Jordan, along with Culden were seen training for the Canine Tooth Festival.

Jordan went out to check out Baam because he was wondering how strong he is. He wanted to have a little duel with him. He promised to use one arm. Baam, on the other hand, tried to convince him to help him and go with him to fight Zahard's Army. Then they were interrupted by one of the attendants of High Priest. After the attendant attacks them, Jordan transformed into his Second Form - Green Furry Beast and attacked back. Despite using his full power, R got overpowered by Baam and Jordan. He got immobilized by Jordan's binding skill Little Forest. R explained his hatred towards Yama to confused Jordan and committed suicide by using a shinsoo bomb in his head.

As Jordan and Baam went to wake up Baylord Yama, because of the invasion, they were stopped by Tall. Jordan and Tall fought and Jordan is able to defeat Tall.

Afterwards, Jordan went to Yama's room but hears Karaka and Baam talking to him already. He overheard the history of the canine people, and when Yama came out of the room, he asks if Jordan heard everything and tells him that he can leave anytime he wants to join his Yama's brothers. Instead of leaving Yama, Jordan was impressed by Yama being a true lone wolf by not sharing anything to anyone. Jordan then says he'll follow Yama til the end, to which Yama responds that it's always interesting to have a few lunatics in the group.

He was taken hostage by Lo Po Bia Yasratcha.[4]

Retrieved from "https://towerofgod.fandom.com/wiki/Jordan?oldid=147978"
Community content is available under CC-BY-SA unless otherwise noted.