Jääskel (야스켈) was a large, humanoid Regular with four arms that each carried a sword. He appeared during the 29th Floor test and was on the team that faced Khun's Team. Jääskel seemed to have tremendous confidence in his abilities, but he was defeated in one hit by Khun Ran. Jääskel failed the test after Khun's team beat Jääskel's team when Edin Dan disabled the opposing team's cannons. 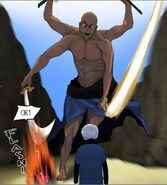 Jääskel is a unique species with four arms. Having four arms can truly has many advantages. He is also very tall so he should be quite strong in combat.