The Item Summoning Center was created by The Workshop to "summon" items or weapons during the Development Tournament of the Workshop Battle. The participants must "buy" or "purchase" the items with Points they obtained during the battle.

After Ja Wangnan defeated several participants along his way, he arrived in front of the river near "Item Summoning Center" & Teammate Summoning Center with the help and guidance of Khun Aguero Agnis who spoke through a special monitor which is most likely an Observer. Before Wangnan cross the river, Khun advised Wangnan to be careful and not let his guard down. Khun then proceed to carry out Hwa Ryun's special plan to deceive FUG by ordering Wangnan to turn off all devices that can be traced to prevent the enemies from finding out their strategy to summon Jyu Viole Grace in this "item store", and not in the teammate summoning area. According to Hwa Ryun, Viole at the time was considered a "Human" and an "item" at the same time.[1]

After Viole managed to escape from Varagarv and Ron Mei who tried to block his way, he quickly fly straight with the Blue Oar to the Summoning Well that Hwa Ryun pointed. Viole then enter the co-ordinate and told F2D-426 to connect to the store. After being connected, Wangnan can be spotted on the screen. In the middle of conversation between Viole and Wangnan, Beta suddenly appeared and pierced Wangnan's heart.[1] After seeing Wangnan was still able to move, Beta tried to go for the kill but Wangnan was saved by Rak Wraithraiser who arrived just in time inside the store, while carrying Phonsekal Laure on his back. When Laure woke up to fight Beta, he noticed that Beta swallowed a parasite inside his body. Khun then asked Laure to pull the parasite out, but Laure rejected because he's lazy and he quickly got bitten by Rak. Laure managed to make Beta spit the parasite out, Rak tried to kill the parasite but failed since Beta was quicker than him. Before Beta was able to swallow the parasite again, Yeon Yihwa arrived inside the store and burned the parasite to its death. After the parasite was killed, Khun received system notification that their team received 500,000 additional points necessary to summon Viole. Wangnan quickly input the required voice command to summon Viole and the loading process appeared on top of the summoning well inside the store.[2]

After seeing the successful summoning process, Beta was enraged and intended to destroy the Summoning Well, but all Viole's friends that were present inside the store managed to fend off and block a couple of attacks from Beta. Afraid that Viole will be summoned soon, Beta aims to destroy the entire store with his Phobos partial ignition. Before the entire store exploded, Khun managed to make Ship Leesoo gave up the game just in time, so the loading process was skipped and Jyu Viole Grace finally arrived inside the store.[3] 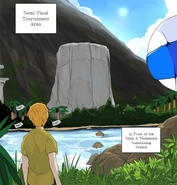 Wangnan headed to the store

Wangnan crossing the river to reach the store 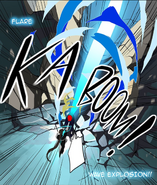 Beta VS Viole in the store

Beta destroyed the store with his Phobos partial ignition

Viole summoning process blue light descent down from the sky