Vol.2 Chapter 273
Hidden Floor Quarantine Area (숨겨진 층 격리구역 안 쪽, Sumgyeojin Cheung Gyeogliguyeog An Jjog, "Containment Area") is a prohibited area inside the Hidden Floor that function as quarantine area to eliminate all data that can potentially harm or threaten the balance of the Hidden Floor.

Any Data Humans, Data Regulars or even real living beings who tried to break the rules, doing bad things, etc. inside the Hidden Floor, will be "arrested" and "quarantined" inside the Fruit of Good and Evil Statue. Inside the fruit, the quarantined people will live or took refugee in the shelter called "The Seed".[1] Once you were quarantined, it means you will be trapped forever and can't escape. The only way to escape is to open the Special Door inside the quarantine area.

Fruit of Good and Evil

The Fruit is actually the giant metal ball like object that is located in the palm of the hand of the giant human monster statue while the Monster Statue itself is only act as a "guard" to prevent quarantined "data" or "prisoners" from escaping and serve as an executor to kill them. The "Fruit" or "Quarantine Area" is a quarantined place for the most dangerous individuals in the Hidden Floor.[2] To put it simply, this is a "Prison". At first, this place indeed was intended as a prison, but after Batis humiliated Big Breeder Chung with his song and uncover the real truth of big breeder, light up the fire to rebel in people's hearts, and make them started to fight for freedom, Big Breeder Chung was flustered and immediately changed the settings of this quarantine area, creating rules and requirements, making "The Warriors" (regulars who come into hidden floor) to complete fake quests so that the requirements fulfilled and the giant monster statue will "execute" the quarantine area, either destroying it or trapping it in the underworld until the next new warriors come to the hidden floor.[1]

This quarantine area might seemed to be built for the good purpose, but it's actually a way for Big Breeder to get rid and "execute" everyone who tried to rebel and might threaten the hidden floor, including normal criminals or those who tried to enforce real justice and uncover the real truth of hidden floor and the evil acts of Big Breeders. 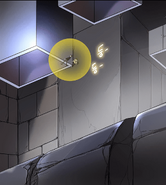 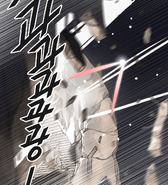 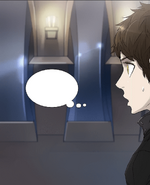 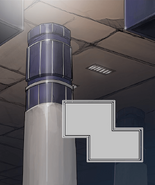 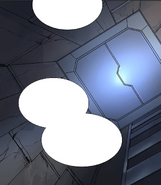 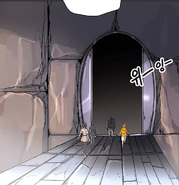 There is one and the only way to "escape" from the quarantine area, that is through a special door. This special door was found by Data Yu Han Sung in all his life and journey as a Data Humans in the hidden floor after experiencing many adventures and deaths with Batis and other 'quarantined data human'. When Hansung first found the door, he and other quarantined data humans tried to opened it, but the door cannot be opened at all. Hansung also tried to destroy the door with his Shinsu attacks, but the door remains intact. It was revealed later by big breeder Chung that the special door has been set up so that no ordinary person can open or destroy it. According to Chung, the only way to open the door, is to use a special, exclusive technique that only Zahard and his companions used. Chung himself didn't know about the special technique, he just know that it belongs to 'Zahard and his friends'. That technique was later confirmed to be "Shinwonryu", after Baam can open that special door by using Shinwonryu, a special technique that only exclusive for Irregulars after they received 'Revolution' by the "God" of guardians, so this explains why Yu Han Sung and other quarantined data humans can't open or destroy the door.