Hell Joe (헬 조, Hel Jo) is an inhabitant of the Floor of Death; he is the lord and ruler of South City and dwells within the Red Fortress.[1]

Before becoming the South City’s leader, Hell Joe was a "Hole Repairman", having served the South City by: creating, maintaining and redirecting the “holes” at the edge of the habitable part of the Floor of Death. These “holes” are special organs, designed to pull Shinsu from the outside in order to make the inner section habitable. Hell Joe came to know everything about holes after working on them for many years. Eventually, the former ruler of the South City, Grand De Sah, began to trust Hell Joe. Afterwards, Grand De Sah called him into his castle and appointed him “Top Hole Master”. At some point, he encountered Urek Mazino while working in the hole system. Urek was fascinated by Joe's grand dream of getting everyone out of Floor of Death; and gave him the monster [2], in order to fulfill that dream. Hell Joe returned to the South City, speaking of a plan to use the holes to share power with everyone on Floor of Death and eventually use the Soul-Stirring Ladle to attempt to escape the floor. Grand De Sah was disapproving of that plan, because he believed that it was the destiny of those on the Floor of Death to one day receive a saviour from the outside; one who would forgive their past sins and release them from the floor. De Sah tried to imprison Hell Joe, but he overwhelmed his minions. Some of De Sah’s servants joined Hell Joe and they tried to take over the South City peacefully. De Sah branded Joe a traitor and made the youngest member of the Grand Family his heir. Then rulership was offered to winner through a vote. To his dismay, Hell Joe lost a vote, becoming lonely and despondent. The Red Thryssa used that state of despair to persuade Joe to "become one" with it, granting him some of the faculties of a Guardian on the Floor of Death. Disappointed that others preferred stagnancy over freedom, he staged a coup and to take the South City by force. De Sah pretended to break the ladle, so that Joe couldn't use it to give back the souls to inhabitants of this floor[3]. He later tried to take the North City, but was thwarted by Grand De Jah's eyes, (which could predict the future) leading De Jah, with the aid of a mysterious woman to push back his assault was forced to give up on invading the North City.

He later convinced David Hockney and Yuliu Mata to find the thorn fragments with the false promise of finding a way for Hockney to leave the Floor of Death. When Hockney refused to find the rest of the fragments after finding one for him, Joe tore out Hockney's eyes in a fit of rage and tried to use them to find the thorns himself, having believed that Hockney’s eyes possessed a special quality, similar to De Jah’s. This was to no avail. He later tortured a Red Witch who was on a pilgrimage through the floor, in an attempt to force her to find the fragments for him; unaware that Guides' powers don't work on the Floor of Death, and causing her to die an excruciating death.

His skin, hair and eyes are grey and he has impressive scars on his face. Red appendages come out of his back and antennas from his forehead. Joe wears a puffy hooded parka-like jacket with a red fluffy collar; it is bound by a three-eyes brooch at his neck. When using the powers of the Red Thryssa, he gains red horns, glowing red eyes, claws on his right hand, and an insectile mouth with mandibles and fangs.

Hell Joe seems to enjoy comics and gets annoyed when others interrupt him when he is reading. According to a Red Witch, he can be described as maverick, in a way he doesn't trust anyone else. Hwa Ryun also declared that he is defying fate itself as he caused a Red Witch to die when she was not yet destined to. 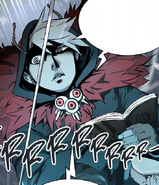 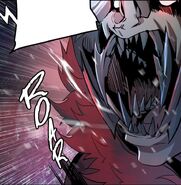 With Ssong coming to tell him of Karaka's arrival, Joe irritatedly told him to get lost as he was trying to finish his comic. Ssong persisted and they discussed what to do when Karaka arrived and they were empty handed, reminding him of the 'promise' they'd agreed on. Joe angrily replied to tell Karaka he could no longer co-operate due to the poor quality of gifts he had received before telling Ssong to get lost.

Later, Karaka burst in and argued with Joe about their ends of the deal. Going on a ranting tangent, Karaka then gave him a new offer: bring him the intruders that had disappeared. Joe initially refused until Karaka told him that one of the intruders was capable of getting them out off the Floor of Death.

With Karaka's new offer being set, Joe asked his Army Commanders whether he should believe Karaka's words with the Commanders having differing opinions on whether to trust Karaka or not. Joe then announced to everyone on the Floor of Death the false revelation that the final piece of the Thorn was in his castle and if they wanted it, they should challenge him and his Commanders.

With a mysterious woman attacking the castle and killing Walcott, an excited Joe got ready to go and confront her himself. On his way, he saw a fleeing Fabregas. Calling him out on his cowardly actions, Fabregas tried to retaliate but instead fell victim to Joe's fearsome power. Ordering Fabregas to capture the other intruders if he wanted his power back, Joe went off to confront Yuri.

Seeing power of possessed by Ghost of the 13 Months Yuri, Hell Joe asked her for favor to break the curse keeping him on this floor. Even after offering anything she wants and declaring his plan to become King of the Tower, the Ghost rejected Hell Joe saiyng he is not the King she is waiting for. Their negotiations were interrupted by Garam Zahard. Hell Joe was trying to help possessed Yuri, but she attacked him in return. After arrival of Baam, Yuri caming back to her senses and getting ignored, Hell Joe got impatient and just attacked everyone. With power similar to Administrator of the Floor, teamed up princesses were no match for him. But he was stopped by heroic arrival of Urek Mazino.

Urek came to question Joe what happend with him nad his dream. He noticed that Hell Joe wasn't the same as he met him for the first time. Urek told Joe that he "got smaller" by losing excitement about his ambitious huge dream. Hell Joe didn't want to believe Mazino. It was shocking for Hell Joe that, even with his power of Administrator, he couldn't beat Urek, who wasn't even using Shinsu. Red Thryssa, irritated by Mazino, taken over Hell Joe. But it's tremendous power wasn't enough to defeat irregular. Urek was just pretending to take the beating, so that Red Thryssa wouldn't notice injecting drug, that would seperate it from Joe. Mazino, dissapointed with Red Thryssa's power, literally punched it out of Joe and ripped it's head off. Unconscious Joe fell down.

After losing Red Thryssa, Hell Joe got beaten by Hockney, who berated him for what has he done. Joe was despairing about Urek taking away his power. Mazino tried to cheer him up to go make his dream come true again. While Joe was saying that's impossible now, he suddenly lost consciousness along with others inhabitants of Floor of Death.

When Po Bidau Gustang returned souls to Spirit Room, Joe woke up. He rejected help from Urek to leave that floor. Joe didn't like what he found out about himself, while he was powerful, saying he is just a loser now. Joe walked away with his subordinates.

Later Gustang erased memory of every inhabitant of Floor of Death.

SIU explained that he is strong, even by High Rankers' reckoning, especially so since he is on his 'home turf'.[4] He is among the strongest on the 43rd Floor; even a person of Karaka's strength cannot take him lightly.[5] Due to his absolute knowledge of the holes running within the Floor, Joe is able to disable his opponent's Shinsu attacks by manipulating the holes.[5] Together with his Red Thryssa abilities, it has made him almost invincible on the Floor of Death.

Red Thryssa: Hell Joe's main offensive power stems from his acquisition of the abilities of the Red Thryssa, a fearsome predator. The Red Thryssa's abilities exist equally within his teeth and right hand and enables him to paralyse and absorb the powers of any Floor of Death inhabitant he catches.[5] While this allows Joe to somewhat circumvent the immortality spell, using the ability does not actually kill inhabitants of the 43rd Floor but makes it almost impossible for victims to recover their powers.[5]