Tower of God Wiki
Register
Don't have an account?
Sign In
Advertisement
in: Article stubs, Characters, Unknown Being, Sealed
English

Healing Flames is one of the two types of Yeon Family Flames that originated from an ancient master of Yeon Hana and Evankhell. This two special flames are known as the Primeval Flames. This is a flame is that capable to save anything.

The Healing Flames formerly belonged to Ranker Yeon Woon which he manifested in the form of a weapon, the Woon's Hammer. The flames is now currently resides within the body of Khun Aguero Agnis after he accidentally sucked in all the power from the hammer in order to save him from dying.[2] Inside the Khun's body, The flames took the form of Sweetfish (은어, Euno).[3] It is unknown what caused the flames to manifest into the form of Sweetfish, but it might be a symbolism about the Sweetfish that sacrificed its life to save Khun from Boiling Acid in the Hell Train during the Dallar Show game.[4]

The Healing Flame is a sentient entity since it talked to Khun Aguero Agnis and warned him not to overuse its power or spread the flames too recklessly because it will consume him and put others around him in danger.[1] Not much known about its personality at the moment.

When Rak Wraithraiser run towards Khun's location because he was concerned, Rak found him laying on the floor unconscious and full of blood. Then, a sudden burst of flames erupted from Khun's body and healed all of his injuries. Rak was very surprised and think that Khun was dead.[6]

Khun used his Lighthouse to survey the location of the entrance to the underground facility where Doom was sealed. It was guarded by Venti, Apple and a mysterious person. In his monitor screen, Khun saw one canine ranker, Berdych was sitting unconscious. Just when Khun thought the canine ranker was dead, Fire Fish suddenly appeared and Khun instinctively knew that the ranker was still alive. Khun and Rak then use the warship and attack with the main mission to save Berdych. After Rak distracted the enemy ranker, Venti, Khun quickly launched the Fire Fish and it covered Berdych's body with the flames, completely healing the ranker. Venti tried to knock out Berdych with his bullet but failed.[7]

After Berdych destroyed his attack, Venti was shocked and confused how the canine ranker came back to life because he thought she was dead. Venti suspected that it could be because of Khun's fire.[8]

When Khun and Rak were caught by Baylord Doom, the executive Berdych went to save them. Berdych said that she will help them because Khun saved her life with his flames power. Berdych also asked Khun to lend his flames power again because she felt an increase of power in her strength.[9]

After Ranker Daleet turned sides and betrayed Baam's team, he proceeds to rise his needle to attack. Rak quickly forms a rock wall but it was destroyed easily. After the attack, Baam prepares for a counterstrike with the help of Khun's Fire Fish.[10]

During their fight against Daleet, Khun also use the flames power to reinforce Rak's stone shield wall.[11]

Khun and White were seen together and surrounded by several red stones and the fire fish circling around it. This combination speed up the process of White collecting and consuming souls via the Spell of Soul-eating.[12]

After Khun took the mouse from Khun Marco Asensio inside The Cat Tower, he was teleported right into the Cat Map Floating Fields, the map where Baam fought White. Seeing that Baam was in struggle, Khun quickly use the flames power since he remembered it could be connected or linked to White by using a Spell.[13] Because they were connected, the flames were able to weaken White's strength and thus allowed Baam to win. In the end of their fight, Khun and Rak also received some portion of White's power due to being connected with the flames.[14]

When Baam intended to absorb Leviathan into his body, Khun quickly bring out Fire Fish to help Baam by reinforcing or increasing his power.[15]

Healing any injuries, severe or fatal.[6] Even in near death, as long as the victim is still breathing.[16]

The ability to increase/decrease powers and abilities of a person. The user can freely enhance or weaken the power of their target. It can either be used directly or weaken the target that who has received buff for tricks and tactical purposes.

Bind and Connect to Spells.[13] 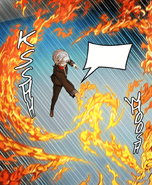