Headon (헤돈, Hehdon; "Headon") is the Administrator of the First Floor and the caretaker of the Tower.[5]

Headon has an appearance reminiscent of a white rabbit because of his long ears. He swirls a long yellow stick with two green balls at each end. Headons face is featureless except for a black, slit like structure which can open to reveal narrow eyes or even his "mouth."

Headon talks in a friendly tone, but has been shown to have a cruel and manipulative streak. Headon presents his ideas and opinions in a logical and pragmatic manner, but his goals and desires themselves are not understood. Headon is perfectly willing to manipulate dozens of lives and create the nucleus of civil unrest to attain his mysterious goal. 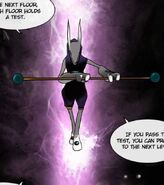 Although most Administrators normally stay on their Floors, Headon seems to be the only Administrator with the ability to visit other Floors of the Tower. This is because he teleports into any of the 134 Floors of the Outer Tower or the Middle Area when selecting Regulars.[5] Headon travels across all Floors and selects people that catch his eye. The selected people are known as chosen Regulars (선별인원, seonbyeolinwon; "selected members"). These people begin at Evankhell's Floor and climb the Tower from there.

Rachel entered the Tower, calling him "Fae", and asked for guidance. He told her she wasn't chosen to climb the Tower, to her dismay, calling her an "incredibly dirty, foul, lying, naughty little girl". She asked for a chance to gain the opportunity and Headon called upon the Ball Test. When she refused to take such an overwhelmingly dangerous test, she was locked away and forced to watch Baam take the test in order to find her.

When Baam, in search of his friend Rachel, came into the Tower, Headon welcomed him. Then he offered Baam to take the Ball Test, telling him he could go to the next Floor if he could pop the Ball. When Yuri and Evan arrived and told him it was too much for Baam, he answered that the test was at the adequate level, because Baam was an Irregular. However, Headon agreed to bend the rules and said that if Yuri lent Baam the Black March, he would look away just this once.

When Baam disappeared with the Black March after popping the Ball, Headon urged Yuri to go and find him. After the angered Yuri left, he asked Rachel, who had been watching the entire test, what she would do now that Baam had begun climbing the Tower. Rachel wondered why it was that Baam had been chosen and not her. Headon replied that it was the will that was important, complimenting Baam's courage and saying that, compared to that, Rachel was unqualified to climb the Tower. He went on to say that if she could fulfill his request, he would let her be the heroine of this story. Since she ascended Floors, it was assumed she agreed. Headon lent Akryung to her to act as a guard and sent her up. It was revealed that Yu Han Sung, the Test Director of the 2nd Floor had also been conspiring with Headon all along to allow Rachel to ascend the Tower. Yu Han Sung then introduced Hwa Ryun to Rachel as her Guide, who along with Yu Han Sung, manipulated all the Regulars into feeling obliged to help Rachel climb the Tower.

Administrator Powers: It has been previously stated by SIU that even Zahard — considered widely to be one of the most powerful beings in the Tower, given his status as King of the Tower and strongest active Ranker — can't win against an Administrator in a fight. Given this statement, it is likely that Headon is phenomenonally strong, as he is an Administrator. Headon has been shown using some of the standard powers of an Administrator, such as the ability to administer tests.

Complete Mastery of Shinsu: Headon has been shown to be capable of controlling Shinsu, generating it with ease. As an Adminstrator, it is likely that he outclasses even the most talented Shinsu users of the Tower, such as Zahard and the Family Heads.

Teleportation: Headon can instantly teleport himself and others through the Tower, seemingly without any limits on distance, speed, or frequency. When he does this, a pink flash appears momentarily.

Caretaker of the Tower: As Caretaker of the Tower, Headon has been shown capable of making decisions that greatly impact the Tower or bypass its established rules. Despite the fact that Rachel had no unique powers, was not chosen by Headon to climb the Tower, and did not enter the Tower from the outside by her own will, Headon allowed her to ascend the Tower in exchange for her cooperation in eliminating Baam.

Language Fluency: Headon appears to be capable of speaking multiple languages. In his initial meeting with Baam, although the Irregular didn't have a Pocket or speak the common tongue of the Tower, Headon was capable of fluently communicating with him.