[9]
Expert Swordsman: Hatsu is a very good swordsman, wielding his swords fast and precisely. He is well trained, is strong physically and can easily best multiple Regulars in a swordfight. He was even able to hold off Quant Blitz for a short time, according to whom, Hatsu's nitōryū (이도류, idoryu) skills are remarkable. Even when fighting with a single sword, he can wield it ambidextrously, gripping it with either hand.[10] His training also gave him an exceptionally powerful grip, such that he may grasp whatever he chooses without fear of losing his hold over it. His grip has proven capable of even briefly restricting the movements of a Ranker.

Sword That Flies Higher Than Any (누구보다 곺이 나는 감, nuguboda gop'i na'neun gam):[12] This sword has a red hilt with a similarly colored tassel hanging from it. When Hatsu throws it into the air, it will move on its own, attacking and blocking for Hatsu in midair.

Sword That Flies Lower Than Any (누구보다 낮게 나는 감, nuguboda najge na'neun gam):[12] This sword has a blue hilt and tassel. It can emit a small but potent blast wave when Hatsu swings it hard.

Expert Swordsman: In Part 2, his fighting style is similar to his initial one. But instead, he now wields one sword (ittōryū) instead of two. His swing is much more powerful and his control over shinsu has improved. He is capable of wielding a metal pipe as if it were a sword and still fight with a high level of skill.[13] Even though he is not from a Great Family or a Special Family, Hatsu has proven to be skilled enough in his swordsmanship that he is capable of briefly hold his own against a Great Family member and even a Princess of Zahard in direct one-on-one combat, despite being physically outclassed by both.[14][15]

At the beginning of Part II, Hatsu had replaced his two initial swords with a single katana that had a silver cross-guard, a red and black hilt and a red tassle hanging from its base; this sword was broken during his second encounter with Beniamino Cassano.[18] Some time later, by the 39th Floor, he came into the possession of two new swords. The first is a simple katana which possesses a silver cross-guard, a grey hilt and a blue tassel hanging from its base; its blade was fractured during his battle with Shilial Zahard.[15]

Donghae: His second sword, an Ignition Weapon, which Hatsu doesn't use often because it is difficult to wield.[19] Its blade constantly glows and emits flickering flame-like energy, and its attack power is impressive. Hatsu was able to snap Shilial's rapier-like needle with a single strike, while the full extent of the damage could be seen behind the Princess.[19] Despite its already impressive power, it has yet to be ignited according to Hatsu.[19] 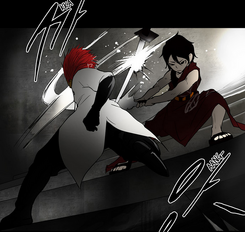 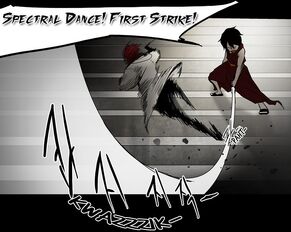 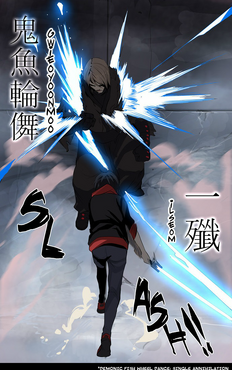 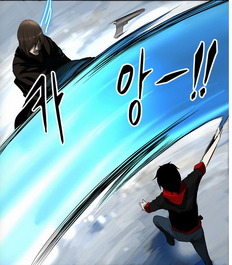 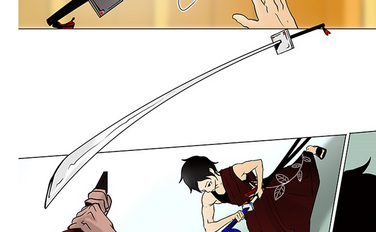 The Sword That Flies Higher Than Any 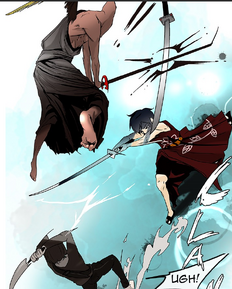 Hatsu fighting Deod (top left) and Clocker (bottom left), regulars during the "Steal the crown" bonus game
Add a photo to this gallery

Retrieved from "https://towerofgod.fandom.com/wiki/Hatsu/Abilities_and_Powers?oldid=145190"
Community content is available under CC-BY-SA unless otherwise noted.