Hanool Kang (강 한울, Gang Han-ul or Kang Hanool) is a D-rank Regular and a Shinsu Martial Arts apprentice underneath Boro. He calls Boro his "teacher" because he was able to keep his Express Ticket. Before he become a Regular, he was a doctor. He accompanied Aka Williams to get off from the Hell Train and will treat Mr.Aka's injury.[1]

Hanool is a big guy with pale skin, brown eyes and grey hair. He wears the same shirt as Felix.

Hanool is more meek and timid than he appears, mentioning that he wasn't cut out to get on the train as he was even scared of participating in the Workshop Battle.[2] However he has his moments of bravery, like when he ran with the yellow ball even though it could have exploded and killed him, and is reliable and trusting enough to follow through with someone's plans. 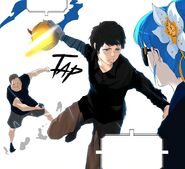 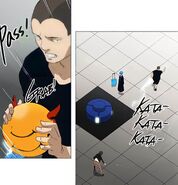 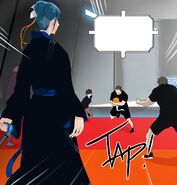 On a private train going to Train City, Hanool confidently talked about whether Sachi Faker was strong or not with Felix and Boro. Boro told him to stop using such a name carelessly as it was taboo aboard the train, Later on, a "Ticket Hunter" entered their section and Boro subtly told him to leave the carriage which Hanool did so in a hurry. After a while he came back in a hurry and saw Boro, who had killed the earlier Ticket Hunter, and and told him that there was also another weird guy in the other section of the train. He and Boro quickly ran towards the other section and, when they reached, they saw many Regulars lying on the ground unconscious and one man standing there. The man asked if they would join him in the tournament at Train City. Boro replied and the two conversed, learning a little about each other before Boro agreed to join Baam, picking Hanool and a train stewardess to go with them. They returned to their original carriage to find two Regulars, with their Tickets, standing above an unconscious Felix. Boro told Hanool to prove he was worthy to be a Ticket Holder and go retrieve the Tickets but he ended getting beaten up by the two.

A little later, Felix awakened and asked what had happened to which Boro filled her in. As the group conversed, Hana Yu introduced herself among other things. Eventually they reached Train City and after getting off their train, Hanool carrying Felix on his back, they soon encountered an elevator. Boro made sure not to choose the 1F - Entrance floor and, after Baam's suggestion, they took the 2F - Residence floor so Baam could meet up with his friends. Once the elevator reached the Residence floor they stepped out to see many Regulars standing about and Boro explained that they were all waiting for a Ticket Holder so they could steal Tickets and get a room. After some minor events, they eventually reached the room Baam's friends were waiting in and then witnessed as Baam easily took out five Regulars that attacked them.
Once inside the room Hanool put Felix down to rest and then listened in as Hwa Ryun and Boro conversed briefly and then as a game, "The Last Seven", was announced. Hanool watched on the TV as the Regulars in the residential area started fighting and also when Ha Yura appeared and quelled it all with her presence.

The next day, with Team Baam drawn against Team Yura in the first game of the tournament, Hanool listened in as Boro and Hwa Ryun talked tactics and highlighted that the result against Yura's team would be decided based on Ha Yura's strength. The two teams stepped out on to the playing field and the rules for "Crazy Yellow Ball Game" were explained, with Hanool comparing the game similar to Rugby sport. When the game got underway he and Baam managed to gain two spaces, however Yura congratulated Baam before offering him a bet. Hanool told him not to accept it but Baam took it anyway and, in the next round, Yura won the bet when she overcame Baam's Fast Skip. Offering the bet to Baam once again, Hanool once more told Baam not to accept it, but he told Hanool to trust him as he would definitely stop her. In the next round Baam almost took her out using the ball's "Crazy Mode" and in retaliation, in the following round Yura launched the ball at Hana Yu and, if not for Baam intervening, that train stewardess would have died, but she got away with just a severely burned hands. Hanool, being a former doctor, patched her wound up and then regroup with Baam as he asked him to trust him a final time. Hanool trusted Baam and, in the next round, he managed distract Rocitane Egel and helped to carry the ball, allowing Baam to defeat Yura.

As Ha Yura conceded defeat she revealed that the tournament was actually a trap that prevented them from escaping the floor. Hanool pointed out that if no-one could leave neither could she, but she retorted that she had an escape plan before promptly disappearing. In the hubbub that followed, the Regulars that found out about the tournament being a trap split into two teams with Aka Williams, Baam, Boro, Khun Ran and Moontari following Hwa Ryun through a maze-like emergency exit and the rest staying at the tournament so that the other participants remained unaware of what was going on.

As such, Hanool sat on the sidelines with Hana Yu and Rak, with the latter having a little tantrum for being left behind. Hanool continued to watch the tournament with a despondent Rak until Khun Aguero Agnis returned with the bad news. Later on, he was in the room, sitting beside the resting Hana Yu, when Boro revealed that Baam was actually Jyu Viole Grace.

Hanool appeared with Hong Danhwa and Boro on the 37th Floor. When Danhwa asked him if the story he told them was true, Hanool piped up too, and Boro replied that Hoaqin was the epitome of 'evil' before then revealing the events that happened 600 years ago on his first time on the Hell Express.

Later, with only 10 minutes left to board the train, he and the others raced towards the stairs of the train but caught the attention of Hoaqin on the way. With freak lightning interrupting Hoaqin's assault, Baam, Khun and Rak swiftly arrived on the stairs leading into the train. A brief scuffle broke out between the two sides but it was interrupted when they were all teleported to the train chief's office. The train chief introduced himself and then informed them about a game that would decide who would become the Slayer candidate in a month's time. At that, he teleported them away to different locations in the train.

Their group immediately encountered the guardian Yokim and they planned on taking him down until Hwa Ryun suggested that from that point onwards, Baam was to take all tests by himself in order to prepare for challenging Hoaqin. Hanool then watched as Baam took on and eventually defeated Yokim allowing them to pass the stage.

During their traversing of the train's pathways, the group eventually encountered the "god" of guardians. After a brief discussion, Baam took the guardian on but the guardian snatched Baam up and took him away. Hanool and the others then waited for three weeks for Baam to return. Eventually Baam hurriedly returned and the group narrowly made it to the 4th stage in time.

Hanool and the others listened to the rules of the Dallar Show and then watched as Khun Aguero Agnis coolly won the first round. During the second round game, "Transferring the sweetfish", Hanool Kang was partnered with Twenty-Fifth Baam and Moontari.

As a D-rank Regular, Hanool must possess a decent level of strength to be able to climb the Tower up to the 35th Floor. He was also a doctor before he entered the Tower and thus was able to bandage up and treat Hana's wounded hands when they were severely burned during the Crazy Yellow Ball Game.[3] Hanool also agreed to accompany Aka Williams to get off from the Hell Train and he will treat Mr.Aka's injury.[1]