Ha Yuri Zahard (하 유리 자하드, Ha Yoori Jahhahd; or "Ha Yuri Jahad"), more commonly known as Yuri Zahard (lacking her family name), is a High Ranker and Princess from the Ha Family. She is also the owner of Black March and Green April, two of the 13 Month Series Ignition Weapons. She is the first Princess to own two 13 Months at the same time since Garam Zahard, and the only other Princess known to have achieved such.[8] Notably, she is one of the most famous Princesses and therefore highly favoured, with much political influence throughout The Tower. After meeting Baam when he first enters the Tower, she becomes quite taken with him and spends most of the story trying to find him again, even boarding the Hell Train to do so.

A few months after the shut down of the independent Tower of God android game by Neowiz Able Studio, a mobile game "Seven Knight" announced the game collaboration with Tower of God characters. Seven Knight decided to present 4 characters of Tower of God that includes Enryu, KoonAA, Baam, and Yuri Zahard. This game collaboration itself more likely a marketing purposes for Korean, in order to increase the popularity of tower of god as a webtoon, because these characters are only available at the Korean Server, not the global one. For more info about the details of Baam as a game character, please visit Seven Knights Wiki (Yuri). 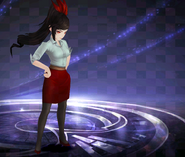 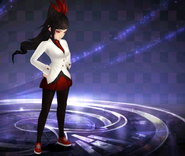 Costume Game Event for Yuri
Add a photo to this gallery