Ghost of the 13 Months

The Ghost of the 13 Months (13월의망령 Yeolset wol-ui Manglyeong) is the soul of an unnamed woman who resides within the 13 Month Series.

The Ghost of the 13 Months is the soul of the first person who once failed the initial selection process to become a Princess of Zahard. As a result, it resents the chosen Princesses, and so it made a deal with King Zahard to infiltrate into the spirits of the 13 Months in order to torment the other Princesses.

When a Princess ignites two or more of the 13 Month Series at the same time, the Ghost takes over their bodies and has complete control. During possession, the Ghost causes the Princess to go on a rampage for up to a week, after which the Ghost loses possession.

As a result, Zahard will declare that the said Princess is insane and execute her. More than five Princesses were sacrificed due to the Ghost possessing their bodies, including Yuram Zahard and Eurasia Enne Zahard. Zahard used such methods to keep any Princess from collecting all of the 13 Months.

Ghost takes control of Yuri Zahard's body when she ignited Black March and Green April simultaneously. She then played with the life of Hell Joe's subordinate, Sanchez, until Garam Zahard appeared. When Garam distracted her attention, Kranka used an ancient cloth magic item that trapped the Ghost. The Princess then attempted to remove the spirit from Yuri's body using the Bell of Dawn, but Hell Joe interrupted this process, thinking that the power of possessed Yuri could help him get outside the Floor of Death. However, Ghost attacked him instead upon being freed.

Ghost of the 13 Month Series disappeared when Yuri regained consciousness after seeing Baam . 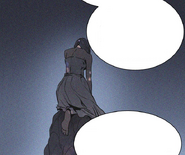 Failed in being chosen as a princess

Yuri Zahard possesed by the Ghost and Garam Zahard
Add a photo to this gallery
Retrieved from "https://towerofgod.fandom.com/wiki/Ghost_of_the_13_Months?oldid=136518"
Community content is available under CC-BY-SA unless otherwise noted.