Flying Launcher are a test target used in the Advancement Test on the 49th Floor.[1]

Flying Launcher is used to test the participants skills in order to let them continue to the next floor. They are medium-large, but posses high maneuverability and speed, easily capable of dodging a variety of attacks.

Khun requested help from Rak, to be able to destroy a Flying Launcher, but the Fly managed to dodge Rak's attack very easily. Khun then froze the Flying Launcher with his new Lighthouse Flow Control technique, the "Ice Triangle" and finally Rak crushed it with his stomp.

The Flying Launcher is very fast and very agile. It's hard to catch since it can also evade or dodge an attack. 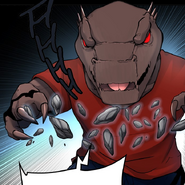 Rak use stone shinsu to attack the Flying Launcher