Evan Edrok (에반 에드록, Ehbahn Edeurok; "Evan Edrok") is a High Ranker as well the Chief Guide of Zahard Royalty, which is a unique position in the Tower. He always seems to follow his partner, Ha Yuri Zahard.

Evan is a Silver Dwarf Guide. Evan climbed the Tower many years ago and has been a Ranker ever since. He has forgotten the reason why he climbed the Tower. At some point in his past, he journeyed to the 43rd Floor on a pilgrimage but never went to the Floor's center.[4]

Evan is a man with extremely short stature. He has silver hair and milky-colored skin. He switches between outfits during travel, sometimes wearing black overalls which cover his body up to his mouth while at other times a green explorer's jacket. Yuri Zahard, his partner, always makes fun of his height as being too short.

He generally maintains a cautious and serious demeanor but can also be blunt at times. He seems to have a penchant for calling people names when he becomes annoyed. Evan loses his temper rather often while guiding Yuri and her company. 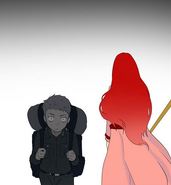 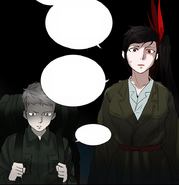 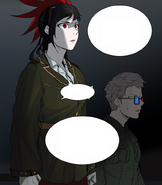 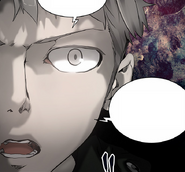 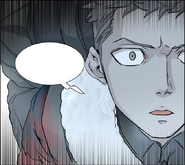 When Evan first appeared, he and Lady Yuri were climbing downstairs to the First Floor to meet Baam. Despite his warning about Irregulars, Yuri adamantly revealed herself. Then, Yuri forced Evan to give Baam an A-grade Pocket since Headon had not provided one. The test Baam had to pass was a Ball Test, in which he had to get past a white Steel Eel and pop a ball. Even though Evan knew the way to pass the test, he couldn't teach it to Baam, because the knowledge was useless without necessary courage and determination. Fortunately, Baam successfully used Evan's method to get past the eel, without Evan even telling him, much to his and Yuri's amazement. However, the ball did not pop even when Baam pierced it with the Black March. Evan then told Baam to ask the needle for help, which Baam did successfully, Igniting the Black March. Baam blew up the Ball and was sent to the next Floor.

When he next appeared, Evan was working with the team from Wolhaiksong that Yuri had assembled to retrieve her Black March. They were on an unknown Floor, as part of their journey from the 77th Floor to the 2nd Floor. During part of Yuri's conversation with Kurudan, she mentioned that she would give his Wing Tree to Baam. And when Evan overheard their conversation, his thoughts were "Lady Yuri, it's not a matter you should be accepted on a whim. He is dangerous. Very dangerous".

During the Submerged Fish Test, Yuri and company were scattered throughout the 2nd Floor testing area. Evan and Kurudan confronted Yu Han Sung, bluntly telling him that they were going to take back the Black March. Much to Evan's chagrin, he agreed easily, though no further arguments were made.

As Yuri went on a rampage in the testing arena, Evan reminded her that the test was for Baam to take alone. On his way to meet with Yuri after Kurudan had dealt with Ren, he appeared to be shocked to see a mysterious woman with red hair and eye-patch when she walked past him.

He traveled with Yuri to Repellista Zahard's vacation castle and watches in confusion as she subdues some Royal-Guards. Later on, he confronted his Alumik Edrok about his actions and agitatedly listened as his family member discussed the fate of Baam and the path Yuri might take. Yuri then burst into Alumik's room and dragged him off as she told him that she would be getting on the Hell Train in order to find Baam.

Having managed to board whilst the train was warping to the next Floors, Evan tried to tell Yuri that 'something' was throwing off his ability to discern the pathways on the train. He then told her they'd have to ask "the one at the highest position".

Evan confronted Hwa Ryun and asked her what path she was leading Baam down and she replied that Baam was making his own path that none could foresee before exiting. After the reveal that their team was heading for the 43rd Floor, Yuri told them that she would only let them if they proved they were strong enough.

A few days later, with the Festival Auction not going to Yuri's plan, Evan listened in as Yuri received a call from Maschenny Zahard. When Karaka made his presence and intentions known, Yuri attacked him and the two began fighting, destroying part of the bridge leading back to the train in the process. Evan used his items to begin fixing the bridge and, with the Regulars coming, hid their presence so they could get across without Karaka noticing them. However, Karaka saw through it and tanked a powerful attack from Yuri's ignition weapon to confront the Regulars, shocking the Rankers. Before Karaka could cause any more problems, Yuri unleashed a tremendous attack engulfing the entire station in its scope.

With the train on its way to the next stations, Evan agreed to train Koon and teach him a new Lighthouse control skill. Evan proceeded to put Koon through his paces and also questioned him on how long he would continue to follow Baam.

Evan watched as Koon successfully passed the 42F stage test of the train, noting that Koon couldn't hide his heritage with his spear throwing technique. A month later after entering the 43rd Floor area, Evan discussed with Yuri about the Floor of Death.

He managed to fall down a bottomless chasm and survive, hinting his worth as someone worthy of the Top 100.

As he is a Guide, Evan is sub-par battle-wise in comparison with Rankers of similar rank and is comparable to Ha Yuri Zahard.[5] However, SIU explained that he is not weak, but he prefers not to take a large role in battle–as he tags along with Yuri, she does the fighting as she enjoys fighting alone.[6] Furthermore, Evan casually claimed he could beat up Devy who was wielding a hammer that Ranker Yeon Woon placed all of his flame power into.[7]  Koon Aguero Agnis commented that a High Ranker Guide was really helpful.[8]

He owns the items Frog Fisher and Adam's Glove.

Retrieved from "https://towerofgod.fandom.com/wiki/Evan_Edrok?oldid=118565"
Community content is available under CC-BY-SA unless otherwise noted.