Tower of God Wiki
Register
Don't have an account?
Sign In
Advertisement
in: Characters, Males, Rankers,
and 4 more
English

Enryu (엔류, Ehn-ryoo) is an Irregular. His status is unknown and he is currently ranked 2nd. He is the first known Irregular to have entered the Tower during Zahard's rule.

Enryu is one of the most mysterious characters in the Tower, almost as mysterious as Phantaminum. Currently, Enryu's whereabouts are unknown and no-one knows what he is doing.[1]

Enryu entered the Tower during Zahard's rule. His most interesting achievement, the slaying of the Administrator of the 43rd Floor revealed to the people of the Tower that Administrators, originally thought to be immortal, were not absolute beings.[1] While initially it was unknown why Enryu killed the 43rd Floor Administrator, it was later revealed that he entered the 43rd Floor believing that Zahard had desecrated the Floor that was once Arlen Grace's land. Warning that those who followed the "fake king" would be destroyed, Enryu proceeded to annihilate Zahard's fanatics, slaying the enraged Administrator of the Floor and utterly laying waste to the Floor's landscapes.[6] A huge thorn was left behind at the site where the Guardian died, as Enryu's purpose was to deliver the thorn that would cut the king's throat.

Before this feat, Zahard was #1 in Ranking by then, although his inactivity led to him being pushed down to a 2nd place by Enryu, who took over the 1st place at the time because of this.

Enryu became the No. 1 Ranker with the nickname of "Administrator Murderer".[1] Later on, Phantaminum entered the Tower. With the Zahard Palace Intrusion Incident, Phantaminum quickly took 1st place, pushing Enryu and Zahard down to 2nd and 3rd places, respectively.[1]

Enryu's sobriquet, Red Tower, was given to him because the shinsu within the Tower turned red in his presence, but the reason for this is unknown.[1]

Enryu has been seen to have red hair and eyes. He wears a brown jacket and he is known for being quite handsome.

Enryu is known to be a methodical fighter, battling gracefully to the point that his way of fighting is idolized by many Rankers. Enryu seems to hold Arlen Grace in high regard to the point of being outraged and finding the idea of her favored place being used as a temple for Zahard unforgivable. Although remorseless in unleashing his destructive powers and fully confident against enemies, ruthlessly massacring all of Zahard's Rankers with a single burst and even facing the Administrator of the 43rd Floor without fear and fighting it with such intensity as to destroy much of the Floor's environment before finally defeating it, he does not seem to be entirely without mercy; offering all of Zahard's Rankers a chance to leave peacefully and not harming those who fled. 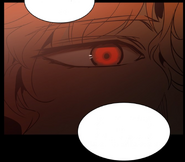 Enryu's eye looking down on the 43rd Floor

Enryu is a phenomenally powerful and accomplished Irregular, having been capable of killing the Guardian of the 43rd Floor. As the Guardians were previously thought to be impossible to kill, this feat alone propelled Enryu to the No. 1 ranking, overtaking Zahard himself. He remained there until Phantaminum appeared in Zahard's palace.

Extremely Advanced Shinsu Mastery: Enryu's most notable trait is his absolutely overwhelming levels of control over shinsu, which is rated a cut above the Guardians and a 'heretical' ability, breaking the laws of the Tower.[1][6] Shinsu in the area turns red when Enryu appears. His mastery over shinsu manipulation is so great that he is rumored capable of creating life using shinsu, a feat that not even the likes of Urek Mazino is capable of achieving.[5] Another testament to Enryu's unparalleled control over shinsu is by how he is fully capable of summoning and completely controlling countless amounts of Baangs of shinsu to the point that he has handled the greatest amount of Baangs in the Tower's history, a truly remarkable feat. Although the accurate number is not recorded, it's clear that it surpasses other recorded figures greatly. According to a Light Bearer who once had the chance to record Enryu's combat, Enryu is known to have handled over 9,000 Baangs during the combat.[7] One of Enryu's most preferred and famously known methods of combat is his capability of creating thousands of extremely powerful spears made of shinsu and striking them downwards; some people use a poetic expression 'Red Rain' to describe this scene and the rare few spectators say the sight is quite beautiful.[1][6] A single burst of his Red Rain was able to completely wipe out every single one of Zahard's rankers that opposed him. His shinsu control is so great that he proved to be superior to Guardians, as shown by how he could harm the 43'rd Floor's Guardian with his Red Rain and entirely render the Administrator's ability to prevent shinsu users from using shinsu useless, eventually overpowering the initially thought invincible Guardian.

Flight: Enryu is capable of levitating himself off the ground and moving at vast speeds through the air with ease, it being one of his key combat attributes.

A few months after the shut down of the independent Tower of God android game by Neowiz Able Studio, a mobile game "Seven Knight" announced the game collaboration with Tower of God characters. Seven Knight decided to present 4 characters of Tower of God that includes Yuri Zahard, Khun AA, Baam and Enryu. This game collaboration itself more likely a marketing purpose for Korean, in order to increase the popularity of the tower of god as a webtoon, because these characters are only available at the Korean Server, not the global one. For more info about the details of Enryu as a game character, please visit Seven Knights Wiki (Enryu). 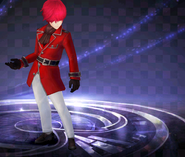 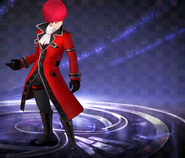