Tower of God Wiki
Register
Don't have an account?
Sign In
Advertisement
in: Characters, Rankers, High Rankers,
and 5 more
English

Dorian Frog seems to be very calm and confident. This is evident when Phonsekal Drak fell asleep during his job and D.F. went to stop the train without his help.[3] 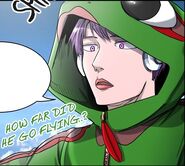 Dorian Frog was part of the Advance Team from the 4th army corp of Zahard's Army, sent to the Last Station to carry out one of Zahard's Orders. He was seen sitting down on a couch until he received a call saying the Hell Train is arriving. Dorian then went out to stop it. After which, a mysterious regular (White) appeared before him. Upon witnessing White, he felt a chilling vibe coming from him and tried to tell the two Rankers to back off, but it was too late. Incinerating Flame of Death obliterated both of them. After both Rankers died, Dorian Frog no longer sensed the chilling vibe coming from White, which is because that attack drained a lot of power from the ancient slayer. Not fully believing White's self-proclaimed identity, Dorian used Ancient Frog Pollack's Well to analyze him, confirming that he does indeed have power greater than a Ranker. With that knowledge, Dorian then summoned his Divine Sea Creature Pollack to battle White. The ancient Slayer was easily blown away by Pollack's first attack.

When Ha Yuri Zahard came out of the Hell Train, Dorian Frog, along with everyone else, kneeled to greet the Zahard's Princess on the battlefield, as is customary. After a short rest, White resumed back to attacking Dorian Frog again.

Dorian Frog has a rank lower than Ha Yuri Zahard.[4] He is very strong, being able to stop the speeding Hell Train with his Frog Tank. He also blocked ​​​​​White's attack, which killed two Rankers without trouble.[3] Dorian is an Anima and he can summon a Divine Sea Creature called Pollack, which was easily able to blow away White, whose power is considered to be greater than a Rankers.

Ancient Frog Pollack's Well (고대개구리 폴락의우물, Godaegaeguli Pollag-uiumul) is a Frog Tank, in which Dorian keeps Pollack. Pollack's Well can make tongues and/or eyes come out of it. Eyes have an ability to analyze person's power level.[4]